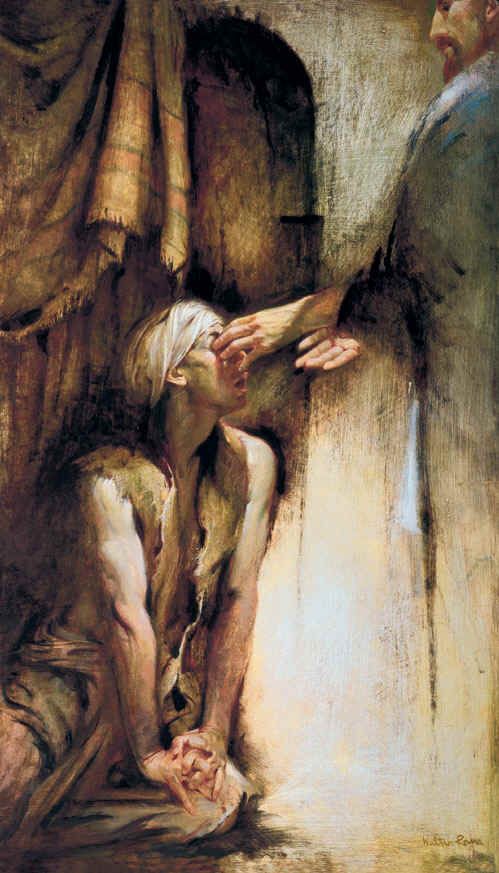 In 1964 a wealthy, well-educated, and successful young man named Jean Vanier bought a run-down old stone house in the tiny French village of Trosly – this house didn’t even have indoor plumbing – and he welcomed into this home two men with intellectual disabilities who had spent much of their lives in a psychiatric hospital. Jean was from a prominent family– his father was the Governor General of Canada – and he had left behind a promising career as a naval officer in order to seek a way to live the gospels more fully in his daily life. Jean began this radical experiment with the idea that he wanted to do something for those who were suffering. But as he lived together with Raphael and Philippe, he began to discover, to his surprise, that they were healing him. “Essentially, they wanted a friend.” Jean said. “They were not very interested in my knowledge or my ability to do things, but rather they needed my heart and my being.” And that kind of friendship, love and acceptance was precisely what Jean needed.

Through his friendship with Philippe and Raphale, Jean began to recognize that those of us who are independent and successful by the standards of our society are, as he puts it, “healed by the poor and the weak, that we are transformed by them if we enter into relationship with them, and that the weak and the vulnerable have a gift to give our world.”

Jean’s life together with Philippe and Raphael attracted others who were seeking a concrete way to live out their faith and the little household became a movement. Today there are 147 L’Arche communities in 35 countries on 5 continents. In each of these communities, people with and without disabilities share daily life together, seeking to grow through authentic friendship and mutuality, and to bear witness to the value of each human life. The guiding principle of L’Arche communities remains the conviction that people with disabilities are teachers, rather than burdens, and that their lives are a gift to the world.

You’ll notice in your bulletin this morning a flyer about National Disabilities Awareness month provided by Pleasant View, a local network of homes for people with disabilities that is supported by our own conference – Virginia Mennonite Conference – that is shaped by many of the same convictions that shape L’Arche communities.

The story we heard this morning from the Gospel of John is about a man who was blind from birth and whose sight was miraculously restored by Jesus. His place in first century Palestine seems to have been similar in some respects to that of Philippe and Raphael in rural 1960s France. This man, unable because of his disability to carry out the usual peasant occupations, is left to beg on the streets. He has parents, but they seem none too invested in his well-being. And, perhaps most painful of all, he is ostracized and excluded from much of the life of his community.

Jesus restores this man’s sight, but the miracle that we witness in the life of this man is not just about healed eyes– it’s about perception, insight, and discernment. It’s about the man’s growing ability to recognize Jesus, and to respond to Jesus in ways that allow him to move closer to Jesus, where he can see even more clearly. And it’s about the invitation his life provides to those around him to see differently as well.

What do the Pharisees see – and not see?

But before we talk about what the man who was formerly blind can see, it’s important to pause and notice what the Pharisees can and can’t see. The Pharisees were a small spiritual brotherhood within first century Judaism. They were committed to living out faith in every aspect of everyday life. Pharisees embraced simplicity of lifestyle, and they resisted the pressure to assimilate to the surrounding Greek culture, seeking instead to keep Jewish traditions and culture alive. They practiced daily prayer and prioritized the communal study of scripture.

The name Pharisee literally means “set apart” or “separated.” Pharisees believed that all adult male Jews – not just those who were born to priestly families or who had academic training in the scriptures – were eligible to perform the rituals of their faith, and they sought to keep the same degree of religious observance in their own homes as that required of priests who led temple worship. Their commitments to each other included limiting their contact with people who did not observe the same level of holiness in everyday life.

Pharisees in the New Testament have a bad reputation – they are often portrayed as Jesus’ adversaries. But they were not so different from us. As Anabaptists, we also seek to live out our faith in every aspect of our lives, to live as a small counter-cultural minority within a powerfully assimilating society, to embrace simplicity of lifestyle, prayer, and the communal study of scripture, and to uphold the call of all believers to live as God’s holy and chosen ones.

And those similarities make me wonder if the same inability to faithfully perceive that afflicted these Pharisees is an inability that might threaten us as well.

When the Pharisees look at the man who was blind from birth, their perception of him is not primarily of a person who shares in their own call to live as God’s holy and chosen ones. They see his disability as a sign of God’s punishment for sin – either for some sin this man committed before his birth, or for the sin of his parents.

And in their commitment to faithfully live as holy people, they keep their distance. They interpret this man as a questionable –even a corrupting – influence rather than as someone beloved by God, someone sent by God to bear witness to God’s goodness.

Seeing things differently could have been quite costly for these men. Associating with the man who was born blind would mean breaking one of the central commitments of the Pharisaic brotherhood – the commitment to remain separated from non-Pharisees. A Pharisee who broke that commitment would likely end up being treated as an outsider by his fellow Pharisees. An entire life’s investment in seeking to live a life pleasing to God, a reputation as a person who is beyond reproach, and a place of belonging within a tightknit community with a shared life of faith– all these could be lost in one interaction.

Maybe even more unsettling is the loss of clarity and confidence about the boundaries of a holy life and a holy community. If this blind man – who seems so obviously ineligible for holiness and service to God – could be included in the household of faith, then who is to say that a devoted Pharisee might not find himself unexpectedly outside the household of faith? If the Pharisees allow for seeing this man as called by God, they will also have to allow for the possibility that the solid and clear boundary line that has always separated insider and outsider is far less settled and impermeable than they had thought.

The very existence of this man and his healed sight calls into the question the idea that some of us are too far outside the bounds to be called and loved by God. His testimony declares that there is no one – no one – whose starting place is too sinful or shameful or broken, too limited by physical disability or emotional pain or mental illness or cognitive impairments, too far from God. And it calls into question the idea that living a life devoted to rigorous spiritual practice can ensure that we will recognize and respond to the presence of God when God appears right in front of us, in the face of fellow human.

What can the man who blind from birth see?

For all the devout faith practices of these Pharisees, it is this man who was born blind who has something to teach them. Despite the fact – or maybe because of the fact – that he has lived his whole life with the shame and stigma of being a “sinner” and an outsider, this man is willing to take the risk of seeing differently.

Even before he is healed, the man obeys Jesus’ instructions, going to the pool to wash, although it isn’t clear what, if anything, he expected would happen when he did. And then, when his neighbors begin to ask nosy questions, he boldly gives witness to what he has experienced, even though it doesn’t fit their expectations of what is possible. The man who has been branded “broken,” “impaired,” a “sinner” for his whole life dares to make the audacious claim – to the community that has given him those labels since birth – that he is whole and well.

And when these same neighbors bring him to the Pharisees for an official religious interrogation, the man refuses to side with those who argue that Jesus must be a sinner. Instead, he testifies to what he knows from his own experience – that Jesus is a prophet, someone who speaks and acts for God. Unsatisfied with his response, the Pharisees increase the pressure, but the healed man holds firm, giving witness to what he knows “I do not know whether he is a sinner.” He says. “One thing I do know, that though I was blind, now I see.”

Some of us need to hear the invitation this morning to look to our brothers and sisters – and especially to those we might not expect to have something to teach us – and listen to their testimony about what they have seen and heard of God’s presence in their lives, even if it shakes up our understanding of God’s presence in the world in costly ways.

And some of us need to hear Jesus’ invitation this morning to know ourselves as God’s beloved ones, holy and chosen, despite the judgements and negative expectations of others around us. The good news of Jesus is that there is nothing in our lives – no, addiction, no shame-filled past, no humiliation or rejection, no physical or cognitive limitation, no desperate struggle with despair or rage or anxiety or fear – that can disqualify us from the love of God in Jesus. We are all invited to start where we are and take the very next step towards Jesus.

At the end of this account, after the Pharisees officially ban this man from their synagogue, Jesus the Good Shepherd seeks him out, and reveals that he is the One sent from God. And the healed man responds with belief, and with worship. This man who is officially banned from his worshipping community for telling the truth about his experience of God in his life, worships the God who came to seek out those of us who have been rejected, shamed, stigmatized, or abandoned. And in doing so, his ability to see shines a light on the path of faith for believers in Jesus down through the centuries, all the way to us, today, gathered in this sanctuary, seeking the next step forward on the path of faith.