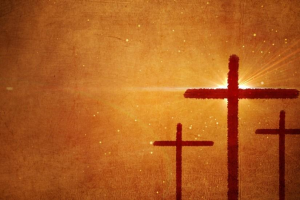 The meeting is finally ended, but instead of heading home he wanders the streets of Jerusalem.  One minute he is feverishly hot and then he’s chilled in the night air, yet his mind is bright. With resolve he passes again by the house where the Galilean rabbi is staying.  This time, surprising himself, he raps at the door. As if expecting him, the host escorts him to the rooftop and seats Nicodemus near Rabbi Jesus who is watching the sky. Jesus, the reveler who turned water into wine.  Jesus, the revolutionary who exposed the Temple’s corrupt economy. 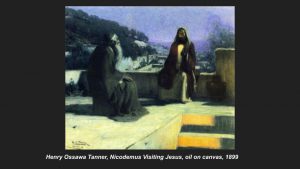 That’s how I picture it.  Nicodemus visits “by night” and the cover of darkness is meaningful. I just don’t know what it means. Perhaps he secretly believes that Jesus is the Messiah and can’t admit this to his colleagues on the Sanhedrin. Perhaps he’s been sent to scope out the political and theological threat posed by this would-be Messiah, this Jesus.

I cannot read the story of this religious leader’s shadowy visit without thinking of other religious leaders and institutions who have intentionally kept secrets related to money, sex, and abusive power. These scandals, this underbelly of religious institutionalism, drain my energies for all things church. So, for all his apparent law-abiding, Pharisaical legitimacy, Nicodemus could be an ancient example of religion gone wrong. I don’t want to be suspicious at every turn, but we can’t afford to be duped, can we? There’s too much evil that dresses up as religious legitimacy. I wonder. What is Nicodemus hiding?

Well, if you know the rest of the story, he could be hiding the beginnings of a plot against Jesus.  Later in the Gospel of John Nicodemus advocates for a hearing, rather than an immediate judgment against Jesus, but Nicodemus is at the table of the conspirators. And their bloodthirsty power is beyond his control. Near the end of the story, after the successful plot to kill Jesus, Nicodemus joins Joseph of Arimathea in tending to Jesus’ body after it’s taken from the cross. In this instance, Nicodemus supplies a huge quantity of herbs and spices. Is this gesture finally the secret disciple’s public act of devotion? Or does the weight of the herbs and spices suggest an even heavier guilt having collaborated in the death of the Lord’s anointed?  I don’t know.

Just before this story, there is a comment about Jesus that might help us hear what the Gospel writer wanted us to hear:  When he was in Jerusalem during the Passover festival, many believed in his name because they saw the signs that he was doing.  But Jesus on his part would not entrust himself to them, because he knew all people and needed no one to testify about anyone; for he himself knew what was in everyone. (John 2:23-25). Even if we do not know what was in the heart of Nicodemus that night, Jesus knew. Or at least the Gospel writer portrays Jesus this way. And it’s true. Certainly today Jesus knows our hearts. I believe the Gospel writer John was inspired by an earlier Gospel, Mark, in which the Lord says: For there is nothing hidden, except to be disclosed; nor is anything secret, except to come to light. (4:22)

And so, Nicodemus by night–whatever he represented, whatever was in his heart–came to the light.  Will we be born again–born anew–born from above– to enter the kingdom of God? Or is it more prudent to preserve whatever status or reputation we have already, and hope we’re exempt from this all-or-nothing matter of new birth?  Based in this scripture reading, a question I’m asking myself is:  What am I willing to bring into the light this Lenten season? 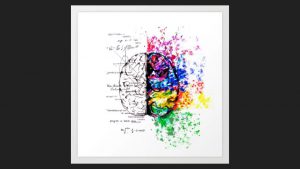 There are a lot of sharp contrasts in this passage. The same is true in our society. Republican-Democrat. Liberal-Conservative. Urban-Rural. Youth-Elderly. White collar-Blue collar. Black-White. Women-Men. Muslim-Christian. Straight-Queer. Religious-Secular. Immigrant-Citizen. With good reason, most of us would like to avoid pitting these people or groups against each other. We want to find common ground across society’s divisions, especially as we address shared concerns related to the climate crisis, racism, social inequity, guns, healthcare, housing and a host of other concerns.

But Jesus not only introduces tension between himself and Nicodemus, he heightens and holds the tension referring dualistically to flesh vs. spirit (v. 6), earth vs. heaven (v. 12) and darkness vs. light (vv. 19-21). It’s offensive. This polarizing language can sponsor the kind of othering, that leads to violence. I wish Jesus weren’t saying this stuff. I wish he’d seek first common ground. On the other hand, there are times when the clarity of the Gospel is in stark contrast to the status quo.  Remember, this Jesus is the one who cleared the Temple. Even so, there is common ground in this story. 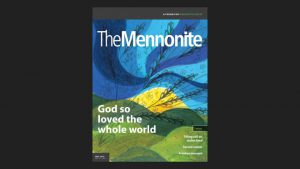 Jesus’ identity and ministry is grounded in the saving love of God for the whole world (v. 16). If you didn’t learn this one as a child, learn it for Lent. For God so loved the world that he gave his only Son, so that everyone who believes in him may not perish, but may have eternal life. As Christians, grounded in the universal theological experience of God’s love for all and God’s gift of Jesus Christ who makes that love known, we can boldly call one another, even leaders and institutions into the light. Sometimes, perhaps, this requires a strong distinction, a stark contrast–the status quo or new birth?

Now when we have a good reputation and an organization or tradition behind which to hide, it can be tempting to remain in the shadows. It’s typical to avoid having individual or corporate flaws and failures exposed by the light. But during Lent we come out of the shadows to be held in Light and healed by Love. During Lent we shake off the bad theology of God-out-to-get-us and come to Jesus whose identity and ministry is grounded in the universal love of God for all. During Lent, like Abram (Gen 12) we leave behind something that we know in order to make an uncertain journey in response to God’s call and the Wind who blows where she chooses.

Like Abram, whom God called on an uncertain journey in order to bless all the nations of the world, we too are on an uncertain journey. If we’re living in response to the universal love of God, then we know we’re going to God and we’re going with God, but there are a lot of uncertainties between life as we know it and life in the kingdom of God. So if you want absolute certainty in life, the God of Abraham, the Jesus revealed in scripture, the Spirit-Wind-Breath who blew you through the door this morning, is really going to mess with you. Like Nicodemus, we too are on an uncertain journey. Jesus spoke to him not as one who had arrived, but as one in the birth canal, about to make a new beginning. I don’t know. Maybe that night Jesus’ words were lost on him. Maybe they will be lost on us. Thanks be God that the Gospel writer and the church of our ancestors preserved these words, so that even with our uncertainties, we might accept a new birth, a baptism into Christ. God did not send his Son into the world to condemn the world, but in order that the would would be saved through him (John 3:17). 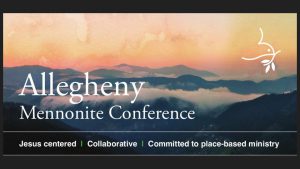 Shall we say that with respect to our conference affiliation CMC has been on an uncertain journey?  Just a few years ago we wondered whether we might find a way to remain within Virginia Mennonite Conference. More recently we decided that it was time for CMC to make a transition to Allegheny Mennonite Conference. Perhaps this is a new birth for us. This decision to transfer from one conference to another was no foregone conclusion, but a process of careful discernment. Like any new beginning, like birth, there has been pain and hope. We believe it will be a blessing to others. Yesterday ten of us–seven delegates and three other CMCers travelled to Hyattsville, MD to meet with Allegheny for the first time as a member congregation. 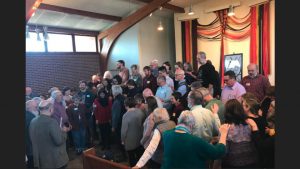 One aspect of their welcoming liturgy that was especially significant for me was related to a large weaving in the front of the worship space. The work was underway, but unfinished. Here are some of the words from the liturgy: Allegheny Mennonite Conference is a web of congregations whose lives intersect and intertwine at specific points in our individual and joint journeys of growth.  In the spaces between those intersections is the One who calls us, the One in whom we live and move and have our being, Our Creator, Comforter, Spirit. What is in between us is not absence; it is Holy Presence.  May the structures we weave through that Presence always be in the service of the reign of God which knows no boundaries, no limits, no end.

A conference is a structure, an institution, and a set of relationships. We will be changed by Allegheny Mennonite Conference and we will change Allegheny Mennonite Conference. In this uncertain journey, as baptized believers, as a peace church where everyone is welcome living generously in the name of Jesus, the wind of the Spirit has blown us together with the Allegheny congregations, so that we might encounter the Holy Presence of Jesus in the spaces between us.

In my mind a decent sermon is unfinished until we’re gathered in worship, when we’re especially sensitive to the Holy Presence between us. This particular sermon became quite uncertain when I began to learn about the artist whose work inspired my imagination about the scene between Nicodemus and Jesus.

Henry Ossawa Tanner was a 19th century African American painter. He was born in 1859 in the North, in Pittsburgh, PA. But his mother, of mixed race, was born into slavery and escaped to the North via the Underground Railroad. Tanner remembered from his youth that some formerly enslaved Christians continued to meet for worship late in the evening. During their years of enslavement, these believers were forbidden to read the scriptures. So they met Jesus by night. Perhaps this history inspired his interpretation of Nicodemus visiting Jesus. Tanner experienced the forces of American racism throughout his young adult life and acutely when he married a white woman. This painting was made about the time that Tanner and his wife made a new beginning in Europe. In Nicodemus visiting Jesus, I can’t get over the light that is coming from below, from underground. I see the dark face of Jesus visiting us. And the light within his breast gives me faith that a new birth awaits us all.