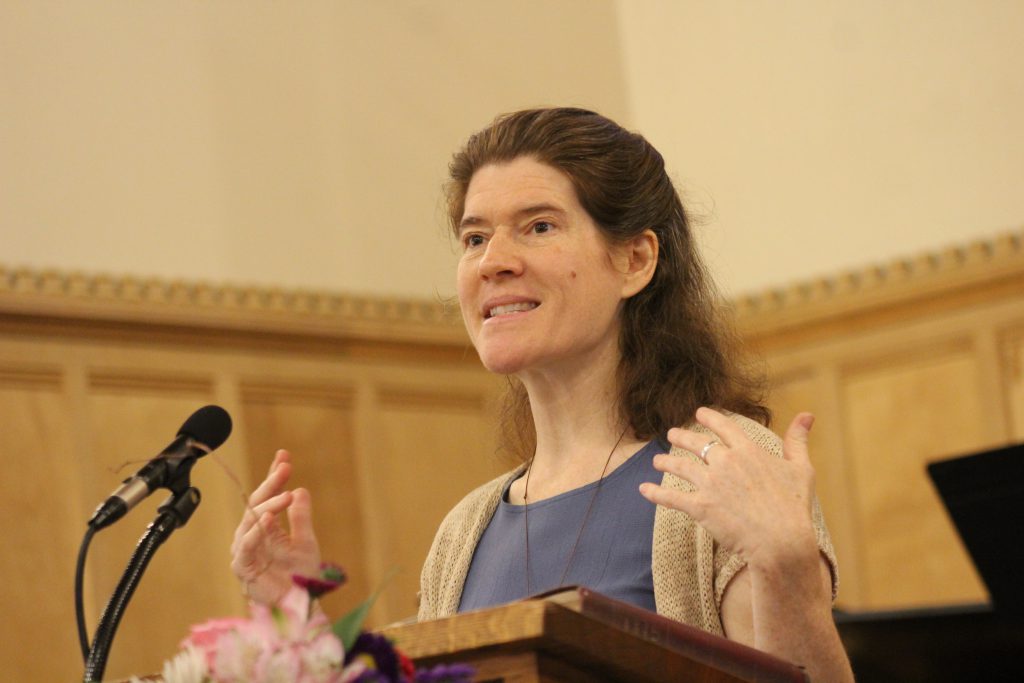 Living from a vision of God’s new day requires a sense of adventure. Peter began an adventure with Jesus near the sea of Galilee. Answering Christ’s call to follow, Peter learned to love, lead, heal and teach in the name of Jesus. The adventure included literal mountain top experiences–seeing the glory of God in the face of Jesus Christ. Peter saw miracles in people’s lives because of Jesus’ words or his touch or being around their tables eating together. The adventure was also humbling–Jesus confronted Peter for thinking and valuing the wrong things. Peter’s faith, like ours, was inconsistent. At one point he denied he even knew Jesus. Yet, he also saw the resurrected Lord.

In Acts chapter 11, after Jesus’ resurrection, Peter lays out “step by step” a controversial vision. Peter understood the vision with the sheet full of unclean animals as a liberation from the conventional Biblical separation between Jews and Gentiles. But it wasn’t just a vision to be freed from conventions of religious circumcision and religious food laws. The vision Peter received had a purpose–to express the good news of Christ in new ways,
among new people. This was an adventure. I’m not using that word to spice up a boring Bible story. The new context that Peter entered was the home of a military officer. Going to Cornelius, Peter put himself (and the other guys with him) in a dangerous situation. Cornelius the god-fearing Gentile could have been offended by the claim that a man, Jesus, was called Lord and Messiah by these Jews. Cornelius, as a Roman centurion, could have been offended that
this Messiah rejected violence and preached peace. He could have been angered by the implication that his job was part of the system that killed this Jesus.

Still, Peter accepted some adventure, some danger, some precarious and unknown conditions. And–good news!–Cornelius and his family became part of the Jesus movement. The downside was that by living into this vision and expressing the good news of Christ among Cornelius and his family, Peter also exposed a tension within the early church movement. You may know this already, but to be clear, the ethnic division between Jew and Gentile was not a polite distinction in the early church. It was a severely polarizing controversy producing generational trauma the effects of which we can still feel. The scripture this morning makes it sound like Peter’s report in Jerusalem tidied. everything up. If God gave the Gentiles the same gift we were given when
we believed in Jesus, who was I to hinder God? The response of the Jerusalem leadership is silence and then they praise God: Then God has given even to the Gentiles, the repentance that leads to life! Praise the Lord! Alleluia! Behold, I am making all things new! Amen. But it’s neither so simple, nor so tidy. A short time later–this is chapter 15–a Council in Jerusalem was again hashing through this same controversy. And according to a letter to the Galatians, Peter, our vision-led apostle de jour is not entirely consistent on this matter of full inclusion for Gentiles. Paul says that he cut a deal with the Jerusalem leaders–you proclaim Jesus to the Jews, I’ll proclaim Jesus among Gentiles and we won’t neglect the poor. He then says that when
he met up with Peter in Antioch, Peter was caving in to the pressure from Jerusalem. Sometimes Peter ate with Gentiles as if they were brothers and sisters in Christ and sometimes he refrained from table fellowship. Paul is upset by this. He says: and others joined Peter in this hypocrisy, so that even Barnabas was led astray…

Community Mennonite Church has a vision to be a peace church where everyone is welcome, to live generously in the name of Jesus. And some aspects of this vision place us in tension with our broader culture. We’re fine with that–faithful Christians are always in tension with their society. Anabaptist Christians, particularly, have a history of resisting cultural forces that jeopardize our vision for living like Jesus.

Here’s a contemporary example. Our society fears the stranger, so we confuse immigration and crime. And our justice system is very successful in systemic racism and retributive justice and lousy at equity and restorative justice. So, as a peace church where everyone is welcome, many CMCers last Sunday were witnessing against the expansion of the local ICE facilities. ICE, immigration and customs enforcement, is responsible for detaining and deporting local
community members, separating families, criminalizing immigration and perpetuating a culture of fear. ICE tends to keep a low profile, so we’re grateful to folks from Virginia Organizing and Fuego who help us see our local context. And we’re grateful for worship that helps us see God’s vision for the world. Behold, I am making all things new! When we are a presence and
pay attention to what ICE is doing, noticing how local law enforcement collaborates, we are living our vision as a peace church where everyone is welcome.

Another example, CMC has a vision to live generously in the name of Jesus. So we provide opportunities to practice generosity. It might be financial giving to fund ministry. It might be giving work gloves to show some love to migrant orchard workers. It might be generously giving our time to organize church retreat or teach a quarter of Sunday School or update the parking lot signage. Thank you for being generous. In the last year we launched a voluntary
service unit. CMCers have generously served on the VS committee and financially supported the renovations and start-up costs. According to the balance sheet, we still have a ways to go on that. And, Ali Zuercher and Liza Brenneman, the young adult volunteers, are generously invested in the Free Clinic, New Bridges Immigrant Resource Center and our local Community
Services Board. Together we’re expressing the good news of Jesus in new ways, among new people. Praise the Lord!

a peace church where everyone is welcome…

…inspiring one another to live generously in the name of Jesus. But it’s neither so simple, nor so tidy. Some aspects of our vision place us in tension not just with broader society, but with fellow believers. When we speak of ourselves as a peace church where everyone is welcome, we also highlight a decision CMC made a while ago. After a few years in a congregational discernment process and through a 90% affirmative vote, in 2013 CMC agreed to “apply Christian ethics regarding celibacy and fidelity to single persons and couples, regardless of sexual orientation.” It was our way of becoming more inclusive of persons who identify as LGBTQ. From what I’ve seen, this decision has strengthened CMC’s capacity to express the good news of Christ. Our decision remains controversial–to a small degree within CMC and to a much larger degree in our conference.

In today’s scripture, Peter’s controversial vision was confirmed in a host of ways: He has an internal sense of the Holy Spirit nudging him to go to Caesarea and not make distinctions between in group and out group. Verse 13 refers to the resonant vision Cornelius received. Verse 15 says the Holy Spirit interrupted Peter’s long sermon and showed up among Cornelius and others in his household. In verse 16 Peter says that this experience was evidence of what Jesus promised: John baptized with water, but you will be baptized with the Holy Spirit. And verse 18 says some who objected to Peter’s ministry with Gentiles, were convinced by his testimony of expressing the good news in new ways among new people.

Here’s a query for this week. How is our congregation’s vision being confirmed and/or being critiqued? Does CMC’s vision enable us to share the good news of Christ in new ways, among new people? Recently 90% of CMCers who responded to a survey, welcomed our making a decision about our conference affiliation in the next 6 months and more than 80% said they needed more information, so we’ve planned sessions in June with three Mennonite conferences. And, information will not be enough. We invite your prayers for CMC, and the wider networks of Mennonite Church USA conferences. During this Easter-Pentecost season we celebrate the unity we have with others who proclaim Christ’s resurrection and we celebrate the
missional diversity of everyone empowered by the Holy Spirit. Our congregational decision will include a statistical vote by CMC members, but what will be more important is the testimony we make regarding our decision. Will we notice the Holy Spirit among us and among others? Will our decision to remain with VMC or choose another conference help us express the good
news of Jesus in new ways among new people?

In the name of Jesus

If we follow Peter’s story in the book of Acts his life resembles the life of Jesus. In the Gospel, while he was praying, Jesus is filled with the Holy Spirit. The same thing happens to Peter at Pentecost–he’s praying with the other believers and then filled with the Holy Spirit. In the Gospel, Jesus preaches his first sermon about the Spirit coming on him to bring good news to the poor. In Acts, Peter preaches about the Spirit’s coming on a whole crowd who would be transformed by a new vision. In both their sermons Jesus and Peter quote the prophets. The prophetic tradition confirms what God is doing today. In the Gospel, Jesus has power over death. He raises a widow’s son. In Acts, as
Pastor Dayna preached last week, Peter raises a widow from the dead. In the Gospel, Jesus ministers to a Roman centurion–saving his slave’s life. And in Acts, Peter ministers to Cornelius, another a Roman centurion–bringing a message that saves his whole household. The scripture writer remembers that Peter’s life resembles the life of Jesus. When CMC is long gone will
someone say our life resembled the life of Jesus?

As your pastor, I am not praying for uniform thinking about this conference affiliation decision or how we individually express generosity. But I am praying for unity in the Spirit of Jesus Christ. Neither Jesus nor Peter, avoided the controversies of their day. They took some risks and had some adventures. They faced criticism–especially for eating with sinners, outsiders. The good news is that God arranged a startling intervention in the world when God raised Jesus from the dead. This resurrection life is echoed in Acts when Peter is liberated from prison. And our life as a congregation is part of this
new day of resurrection in history. Whenever sins are forgiven, the poor hear good news, the sick are healed, the proud are humbled, the eyes of the blind are opened, the oppressed get justice, the lonely are remembered, this is the wonder of Christ’s resurrection. CMC, let’s welcome this adventure with Jesus, live with vision and welcome the Spirit who confirms and critiques the church according to God’s Sophia–wisdom. AMEN.