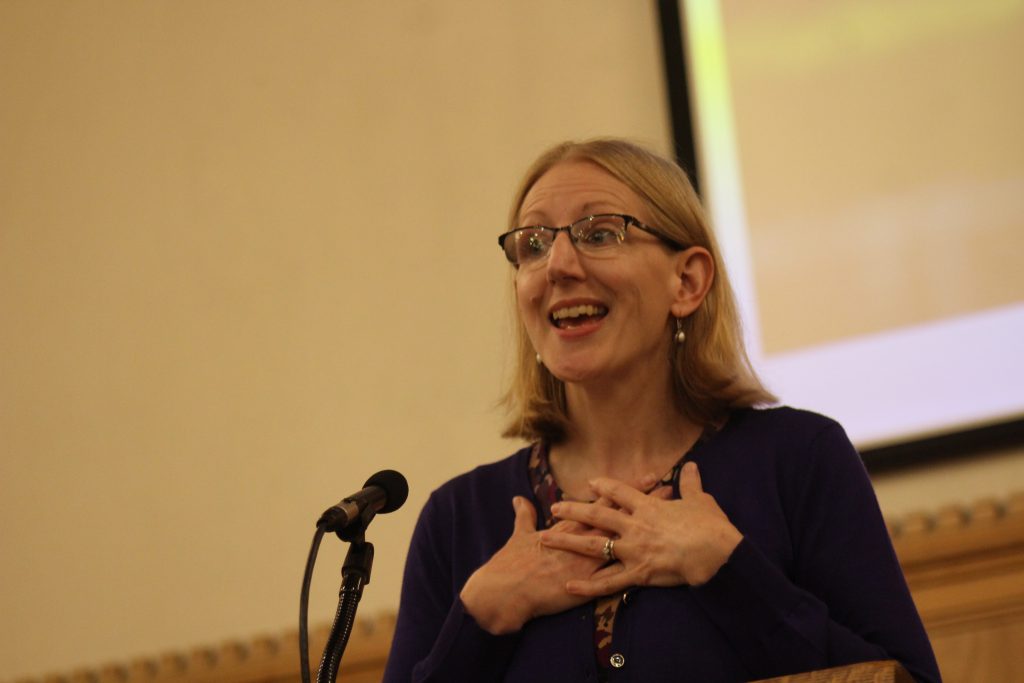 Many of you know that when Eric and I moved to Harrisonburg five years ago, we moved into a house in the Northeast neighborhood that has a big open backyard. That first summer, Eric – who is the resident gardener in our household – laid out garden beds. turned the soil, worked in compost and planted seeds. We watered and waited. And not much happened. A few plants came up, but, with the exception of the onions, they didn’t grow very well. Some of them withered and died. Those that survived didn’t produce well.

We couldn’t figure out why. After muttering some dark pronouncements about his apparent lack of gardening ability, and testing the pH of the soil, he began asking other gardeners to help him figure out why nothing would grow in his big sun-filled garden beds.

Eventually, he came up with a theory about what was wrong. There was a small black walnut tree on the edge of our yard. Black walnuts emit a toxin into the soil through their roots that prevents many plants from growing in close proximity. Our internet research had indicated that the toxin would be confined primarily to the tree’s drip line – and our garden beds were well beyond that, but it turns out that the internet was wrong. The black walnut tree was emitting toxins into the soil that reached three or four times as big an area as its dripline, effectively making our entire back yard inhospitable to most of the vegetables we had hoped to grow.

So – with some sadness – we decided to cut down the black walnut, and Eric set to work cleansing the toxins from the garden beds – turning the soil over and over again to let in air and light, and adding lots and lots of compost. The next year, we planted and watered and waited. And lots of plants came up. So many plants that some of them needed to be thinned out, and then thinned out again. And even after all the thinning, we had a bumper crop. On one particularly memorable day, we filled Noah’s wading pool nearly to the brim with thick juicy carrots, rinsed them with a garden hose, and brought trash bags full of them down to the OCP kitchen.

If you are like me, the language of vices and virtues may not be the easiest entry point into conversations about growing in Christlikeness. Maybe because I grew up in a church tradition with lots of rules, talk about vices makes me think of the long lists of regulations that feel arbitrary and oppressive.

But the language of vices and virtues isn’t about those kinds of rules. And it isn’t about checking off boxes on some moral checklist so that we can feel comfortably superior.

It’s more like the work of gardening. There are certain habits of heart and life that the Christian tradition tells us to look for and to root out because they emitting toxins in our lives and prevent good things from growing. And similarly, there are virtues – healthy habits of our hearts and lives – that create good conditions for Christlikeness to flourish. The Christian tradition of vices and virtues is a tradition of practical wisdom about how to create space and good conditions for growth – a wisdom tradition developed by generations of spiritual gardeners and passed along from person to person and community to community.

Envy is one of those toxins that can poison the soil of our lives. Envy emits toxins into us and into our communities that kill off healthy and flourishing relationships, often before they even get a chance to start growing.

Genesis 4 tells us that Cain and Abel are the first brothers born into this new world God has created. Cain is born first, and he works the soil. Abel is the younger brother, a herdsman. Somewhere in this first chapter of life on earth, there is an occasion for the brothers to give thanks to God, who has given them this land and its plants and animals and made them fruitful. So they both bring an offering. Cain brings some of what has grown from the earth he has tended, and Abel brings animals born to his herd.

And God is pleased with Abel and his offering, but not with Cain and his offering. The story doesn’t say why God is pleased with one offering and not with the other. If you are thinking that that sounds unfair, you are not alone. Theologians have theorized that Abel had a better attitude than Cain, or that God preferred a blood sacrifice, or that Abel gave of his best while Cain just brought whatever was on hand. But the story doesn’t say why God regarded one and disregarded the other.

And I wonder if the lack of explanation isn’t intentional. Because that is how human life is – how our lives are.

One classmate gets tenure at a prestigious university and becomes a well-respected expert in his field – meanwhile, his college classmate – equally intelligent, hardworking and dedicated – suffers through a series of bad bosses and lay-offs, and has to start his career all over again at midlife.

Or a woman easily conceives and gives birth to happy healthy babies, while her colleague lives for years with the secret searing pain infertility, trying to avoid baby pictures and kid-talk at office gatherings.

Or one sibling is his parent’s golden child – the one who can seemingly do no wrong – while the other child is saddled almost from birth with his parent’s own projected fears and failures – he’s labeled irresponsible, untrustworthy, a bad kid – and eventually he begins to see himself that way as well.

As far as I can tell, God isn’t equitable and impartial in giving favor in this story. But God does see and care for both brothers. God sees that Cain is in danger because of his disappointment and anger and warns him – “Cain, he says, watch out! Sin is crouching just outside your door, ready to pounce on you like a lion stalking prey.  You need to do something about it before it takes over your life.”

I think it’s worth noticing that Cain doesn’t take his hurt and anger to God. We have stories in scripture of lots of people who do just that – Hannah weeps with such grief in her prayer for a child that the priest thinks she’s drunk, Job dares to interrogate God in the face of his suffering, Moses argues and whines to God in the desert like a cranky toddler.

But Cain turns his disappointment and anger on his brother, who has no more control over the situation than Cain does. Cain’s desire to be well-regarded by God turns to envy of his brother’s acceptance. Envy takes root and becomes hatred.

And what started with an aching need for acceptance and recognition turns into a far-reaching toxin of hatred. Abel’s life is violently cut short. Adam and Eve have to face the horrible grief and rage of knowing that one of their beloved sons  – a child that Eve co-created with God – has killed the other. And Cain is exiled. God sends him to the Land of Nod – “Nod” is the root of the Hebrew word “to wander” – so he’s literally sent into the land of wandering, far from his family. In killing his brother, Cain has taken matters into his own hands, but he ends up even more alienated than he was before. Now he wears a reminder of what he has done, and of God’s grace to him, on his own body.

Like Cain, our jealousy and envy often have roots in a desire for something that – when separated from shame, self-loathing, hatred and insistence on control – is not a bad desire, maybe even is a good desire.

Like removing toxins from garden beds, God invites us to remove envy from our life so that something beautiful  – so that contentment – can grow there. Contentment a deep sense of peace and joy in what is. It’s a deep certainty that we have enough, that there will be enough, that we are enough. Contentment is a gratitude and delight in what we have and who we are. And this peace and joy come to many of us only after we’ve done the hard work of wrestling with the beast of envy that lies in wait.

The evangelical author, Mary Ellen Ashcroft suggests that the first step of mastering envy is to listen to what our envy is telling us about what we desire.

If we can find the desire at the bottom of our envy, she says, then we can reckon with whether the desire is legitimate and important enough to us that we are willing to pursue it in an outright and honest way. Sometimes it is – sometimes envy is like an alarm going off, telling us that there’s something very important that we want or need and do not have. Maybe there’s something we needed and did not receive at an earlier stage in our lives – unconditional love, security, to be seen and delighted in. When we are suffering from a lack that occurred years ago, a good therapist or spiritual director can often help us find ways to heal. And sometimes there’s a longing for something we need now – maybe friendship, achievement, recognition, love, a life legacy. Only when we know what it is we truly desire can we decide if it’s something we are willing to prioritize and pursue.

And if we discover that the thing we desire isn’t something we choose to pursue – or if our desire is truly something over which we have no control – facing it openly and honestly gives us the opportunity to mourn our losses and let them go. And we have an opportunity to claim the truth that the unmet need in our life is not a reflection of our lack of worth. It’s not our fault. It’s not a punishment from God. It’s not a reason to live in shame or to believe that are less valuable than those who have what we long for. We have an unmet longing, but that does not mean that we are not enough, that we are not beloved.

Envy tells us a toxic lie. It says –  “if you win, I lose. If you flourish, I wither.  If you receive love and admiration, I’m sentenced to isolation and pity. If you gain power and influence, I’ll be powerless and insignificant.” Envy is based on the idea that there is not enough for everyone, that God’s provision for one means that another will go without.

But God declares – in creation, in grace, in love –  that the world is not fundamentally a place of scarcity and fear, but a place of abundance. God’s reminds us again and again that there is enough, we have enough, we are enough – inviting us to make space for contentment to take root and grow a bumper crop of gratitude and joy in our lives.