Lessons from Jesus: Dead or Alive?

The Problem with Christ the King 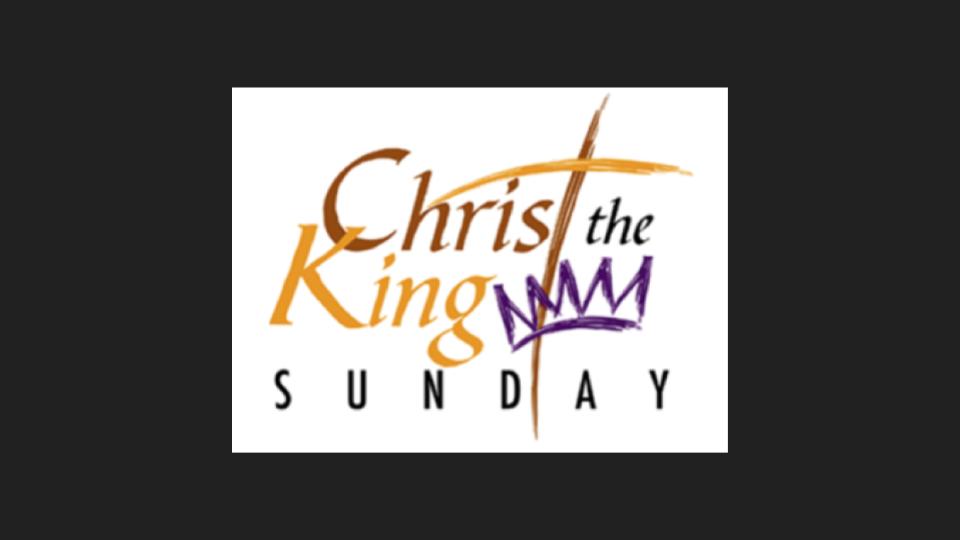 On this Sunday, the last Sunday before we enter into that hinge season of the beginning and the end, the Advent of Christ coming into the world, the church celebrates Christ the King. Sometimes Christians call this “the reign of Christ Sunday” to avoid speaking of Jesus as a king because kings are no longer politically desirable. So it may seem that this Sunday is not exactly relevant for us. Most people in this country don’t have a strong association with kings. Our images of kings are largely negative or make-believe. 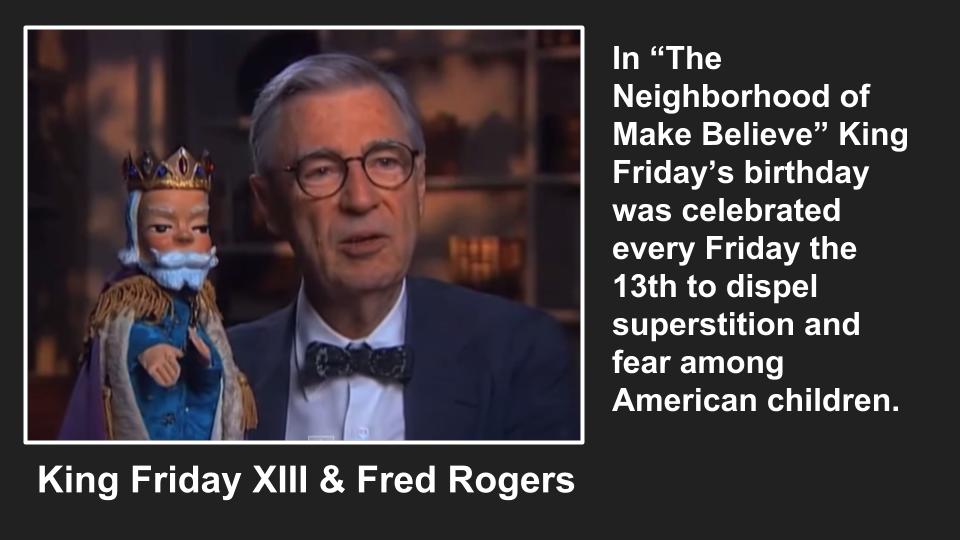 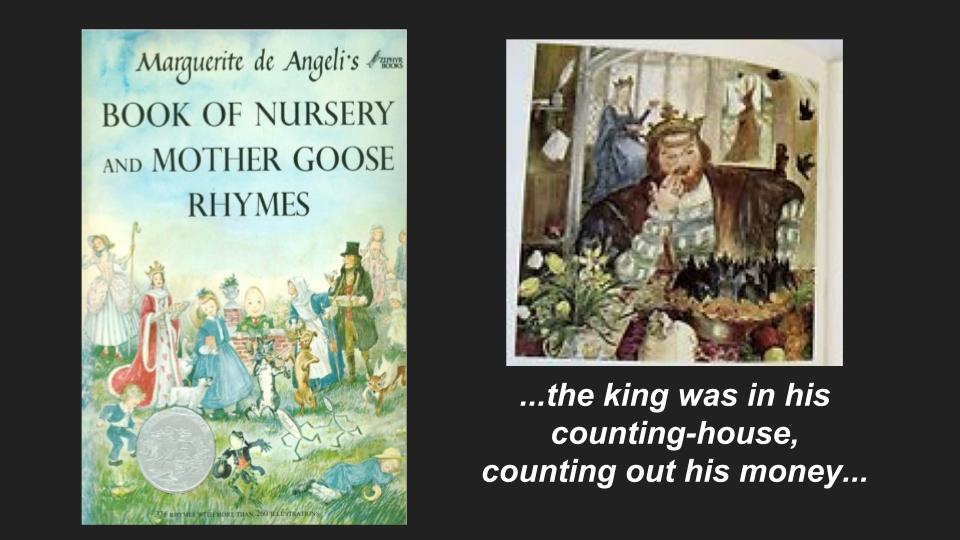 King Friday ruled over the Neighborhood of Make Believe.

So what do we mean when the church claims that Jesus is our king? Shortly after the Armistice that ended the first World War, Roman Catholic leader Pope Pius XI instituted a Feast Day for Christ the King. For Pius, the armistice–the end of active war among nations–was not the deeper peace to which Christ calls us all. The Pope wanted Christians to be an opposition force to nationalism, class division and secularism. Indeed his encyclical recognizes Jesus as a nonviolent king. Pope Pius wrote:

“Christ has dominion over all creatures,

a dominion not seized by violence nor usurped,

but his by essence and by nature.” 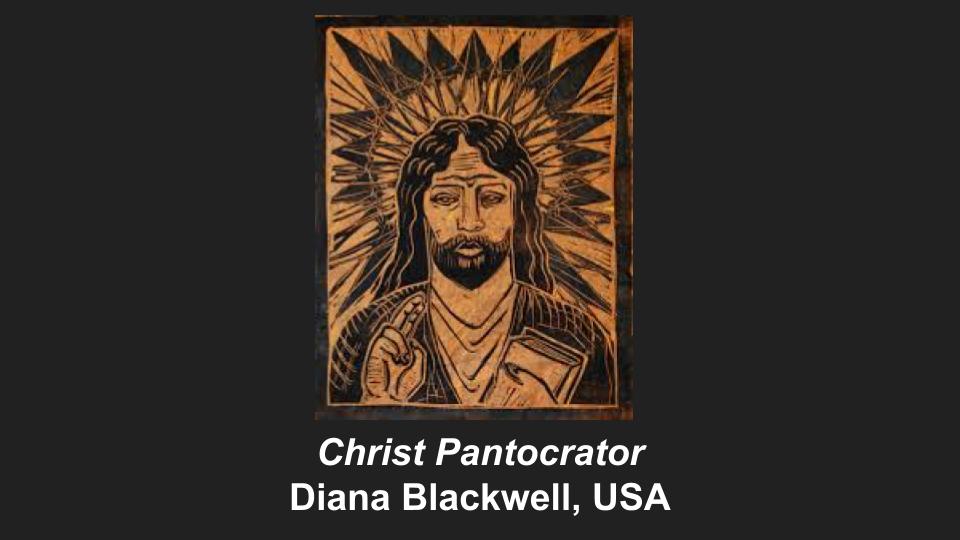 Long before the church celebrated Christ the King Sunday, long before Jesus walked the earth, God’s people longed for a king. Many of us are quick to say that way back when we wanted a king, the prophet–now there’s a role we think we prefer–pointed out just how wrong kingship could go. But nevertheless, Israel and Judah had kings. And even after it became historically obvious that their kings and kingdoms were usually corrupt, idolatrous, violent and exploitative, there was an active longing for God to send an anointed one, a messiah-king to rule in justice and righteousness. And God sent Jesus. The earliest Christians believed that Jesus fulfilled their longings for a king. The problem was that Jesus was crucified and that didn’t seem very royal or divine or righteous or just to the uninitiated. But those who believed in Jesus’ resurrection, recognized that Jesus’ rule was not time-limited. His kingdom was eternal.

So in celebrating Christ the King we declare loyalty to Jesus as the one who rules our lives. Today we recognize that true dominion and power–when it comes from God–is non-violent. A good king, Christ the king, rules with love and forgiveness. On this Sunday we imagine ourselves as humble, loyal subjects in the kingdom, serving our king who is setting the world right. Our king does not threaten or coerce. Our king Jesus empowers us with his own spirit, so that we can live in freedom and joy. Our king does not exploit or destroy. Our King Jesus heals and restores. Our king does not build himself up on the backs of his subjects, but saves us by his own body and blood. Our king does not leave us to our own devices, but speaks to us calling us by name and giving us direction and wisdom for our lives.

I want to read you the scripture from Revelation assigned for Christ the King Sunday. 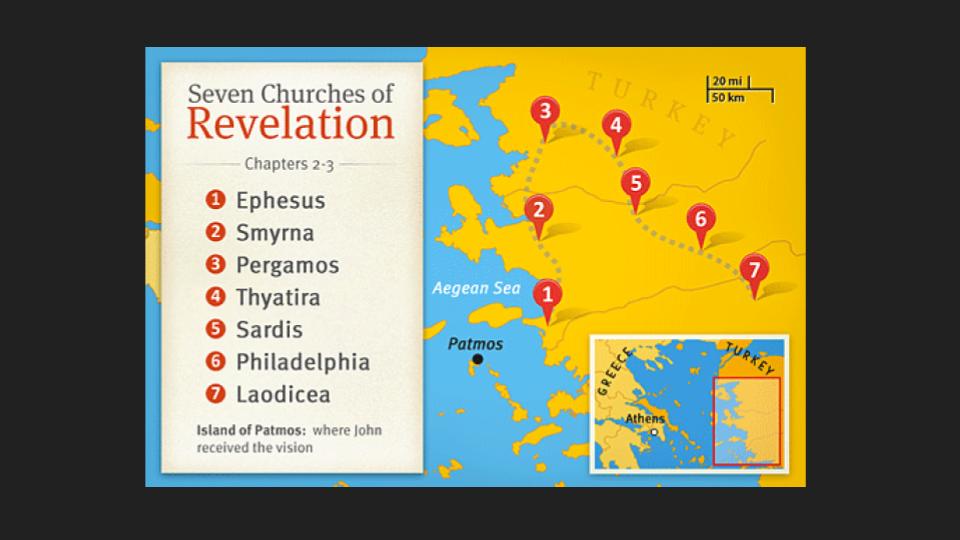 John, the author of Revelation, chose a bad time in church history to be in leadership. Of course none of us really chooses our time, right? John was a regional elder, relating to seven little urban churches. But during John’s lifetime, the worldly king, Emperor Domitian, was considered Lord and God. 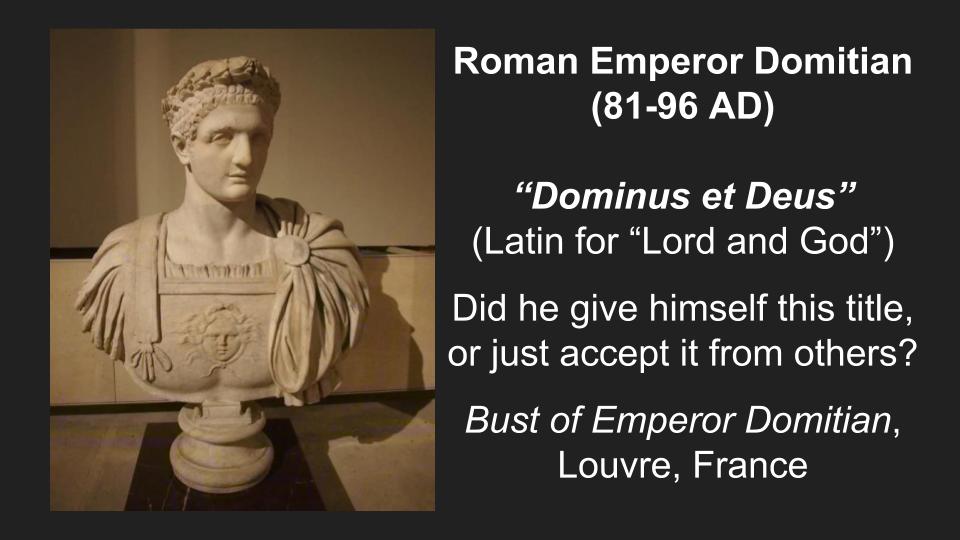 Because John resisted this idolatrous allegiance to the emperor, he was exiled to the island of Patmos. And there he continued to worship the true king, Jesus Christ.

In worship John had some revelations about who Jesus is and who the church is with respect to the larger society. 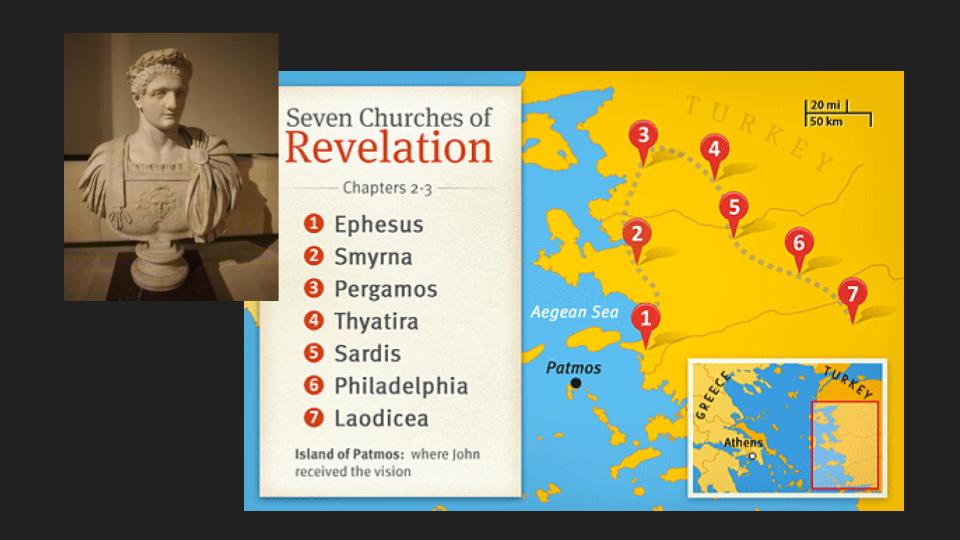 John sees these congregations as a small, yet significant opposition force to the empire. He imagines them as seven lampstands in the throneroom of God empowered by divine spirits. And John also saw the church as the inheritors of a great Biblical tradition of a kingdom that would last forever, so John is always quoting the Bible–the Old Testament. As I read this I’ll give you a little sign with my hands [SHAKE] that some of this is an echo from the Old Testament. The book of Revelation helps the church imagine all over again who Jesus is for us. Listen: 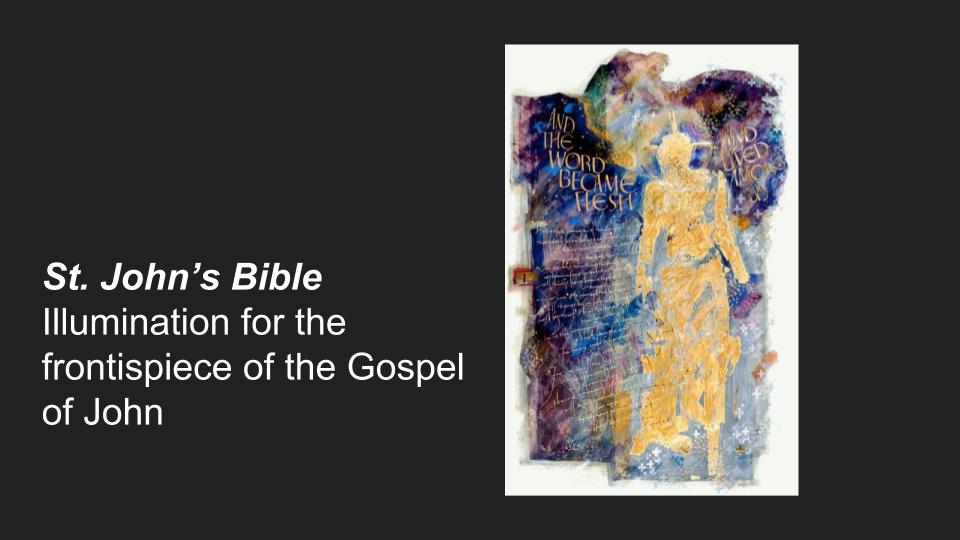 Grace and peace to you

from him who is, and who was, and who is to come,

and from the seven spirits before God’s throne,

and from Jesus Christ, who is the faithful witness,

the firstborn from the dead,

and the ruler of the kings of the earth.

To him who loves us and has freed us from our sins by his blood,

and has made us to be a kingdom

and priests to serve his God and Father—

to him be glory and power for ever and ever! Amen.

“Behold, he is coming with the clouds,”

and “every eye will see him,

even those who pierced him”;

and all peoples on earth “will mourn because of him.”

So shall it be! Amen.

“I am the Alpha and the Omega,” says the Lord God, 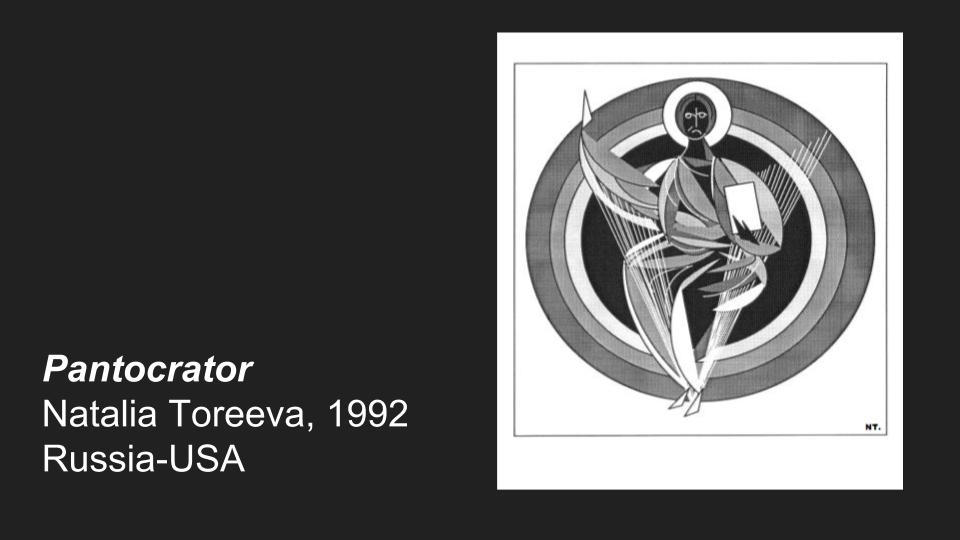 Jesus is the Faithful Witness. In other words, even when the larger society rejects God, Jesus faithfully lives according to the kingdom of God–the kingdom of justice, righteousness, peace, love and forgiveness. Jesus shows us faithfulness, so that we can also be a meaningful witness in the world. Jesus is the reliable image of God for us and for all time. Jesus is God.

Jesus is the firstborn of the dead. In other words, the Roman Empire’s threat of death against anybody who resists imperial power and authority, turns out to be empty. Jesus was killed, and Jesus was raised. Jesus is the power of life over death. He was raised first and we will be raised with him. We do not fear death.

Jesus rules over the kings of the earth. In other words, even when the level of corruption and idolatry among human leaders reaches a new nadir, the church has a different–more authoritative ruler. Jesus even rules over the Emperor! Domitian’s reign was temporary. The reign of Christ is already here and we are loyal to Jesus–not worldly governments, which are sometimes better and sometimes worse. Jesus loves us. In other words, when the church is insecure or uncertain about our place in the world, we need to remember who loves us. Jesus loves us. The love of Jesus is expressed through each other as brothers and sisters in the church. And yet, the love of Jesus is greater than our love for one another. As ordinary human beings we love imperfectly, but Jesus loves us completely, perfectly. Jesus is the unique expression of God’s image in the world.

Jesus frees us from sin. In other words, sin does not have the last word in our lives. When we are trapped by our own history of bad behavior or trapped by the bad conditions of the world, Jesus alone has the power to set us free. We cannot untangle ourselves from the power of sin. We need Jesus. 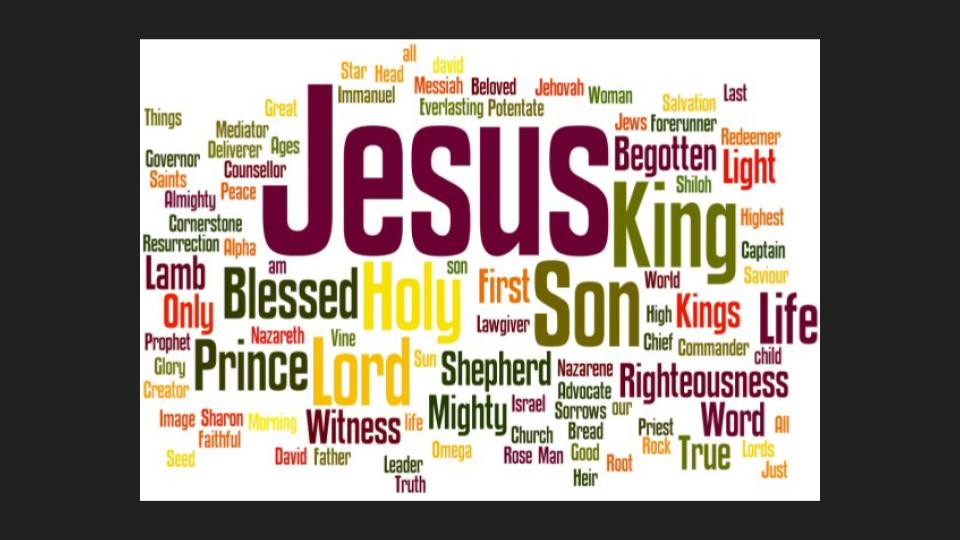 There is an abundance of Biblical names and images for Jesus. And some of us have the mistaken idea that we need to understand, believe and consent to all that Christians have claimed for Jesus before we are ready to be baptized or join the church. But in my experience we keep learning who Jesus is over a lifetime of relationship. In the beginning of the Christian life we may experience Jesus in just a few ways and that is enough. Jesus comes to us today saying–I am the Alpha, the beginning. The world is going to try to fit you into a box. And you will not fit. The world is going to wound you. And you will not be able to heal on your own. The powers of the world will make all kinds of promises and fail to deliver on them. When you begin your life with Christ, you can be saved, delivered, rescued from the falsehoods, the lies, the confusion. When Jesus is your king, your leader, your Alpha you belong to the people who are humbly and courageously living as the body of Christ in the world. 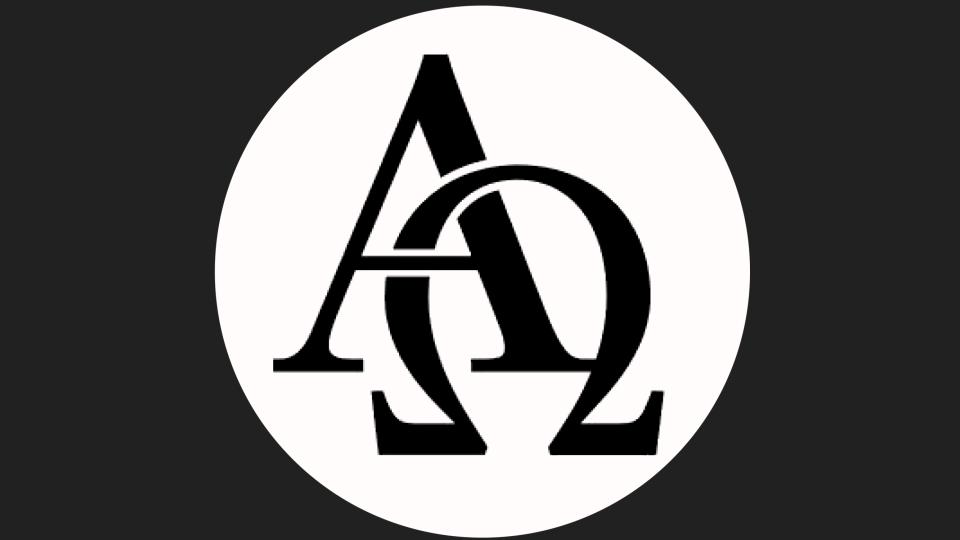 How do you currently relate to Jesus? Is Jesus the king of your life–the good king, whose reign is justice, love, peace and forgiveness–for you and for the world–even for your enemies? Jesus is not peripheral inspiration or inconsequential religion to add to life. Jesus is not a make-believe king. Jesus is the almighty ruler of the world–the Alpha and Omega–the beginning and the end. Jesus himself said: For this I was born and for this I came into the world, to testify to the truth. 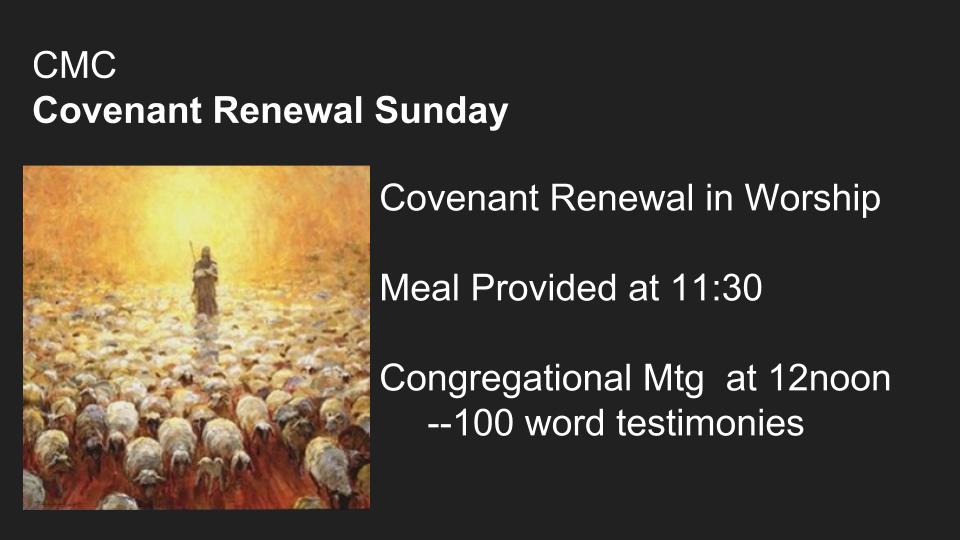 Next Sunday is our Covenant Renewal Sunday. And we’ll have an opportunity to share around tables our testimonies, our truth about life with Jesus. I didn’t get everything about who Jesus was when I gave my life to him. And I’m still learning, still growing in faith. These days I’m believing more and more. Questions about Jesus are not obstacles, but opportunities for knowing Christ as Alpha and Omega–the beginning and the end, the fulfillment of our lives. 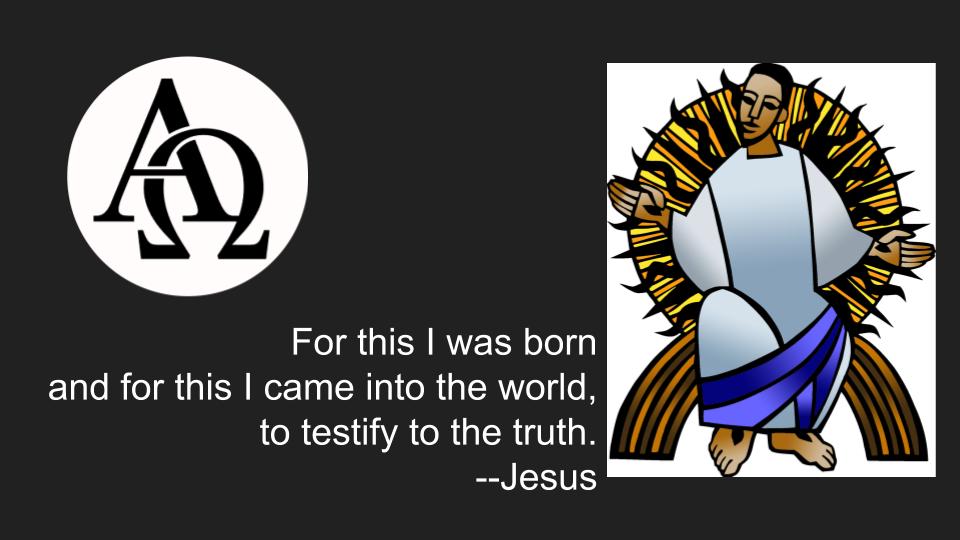 I’m offering to pray with those who want to orient their lives toward Jesus–perhaps for the first time. So, please join me in this ministry. I’m going to pray using I language, but this may be your prayer.

Prayer–Jesus, I don’t fully know who you are, but I believe you are with me and for me. I know that I cannot rule my own life. And I do not want to be determined by the powers around me. Jesus, reign over my life, show me how to live, give me what I need to grow in faith. Help me to hear your voice, to listen to your truth, to behold your glory. Join me to your people–the faithful church–so that I can participate as part of your body. Jesus because you gave your life for me in love, I offer you my life and accept your peace because you are the Alpha and Omega, the beginning and the end. Send me your Spirit to make a beginning with you today. AMEN. [/otw_shortcode_content_toggle]