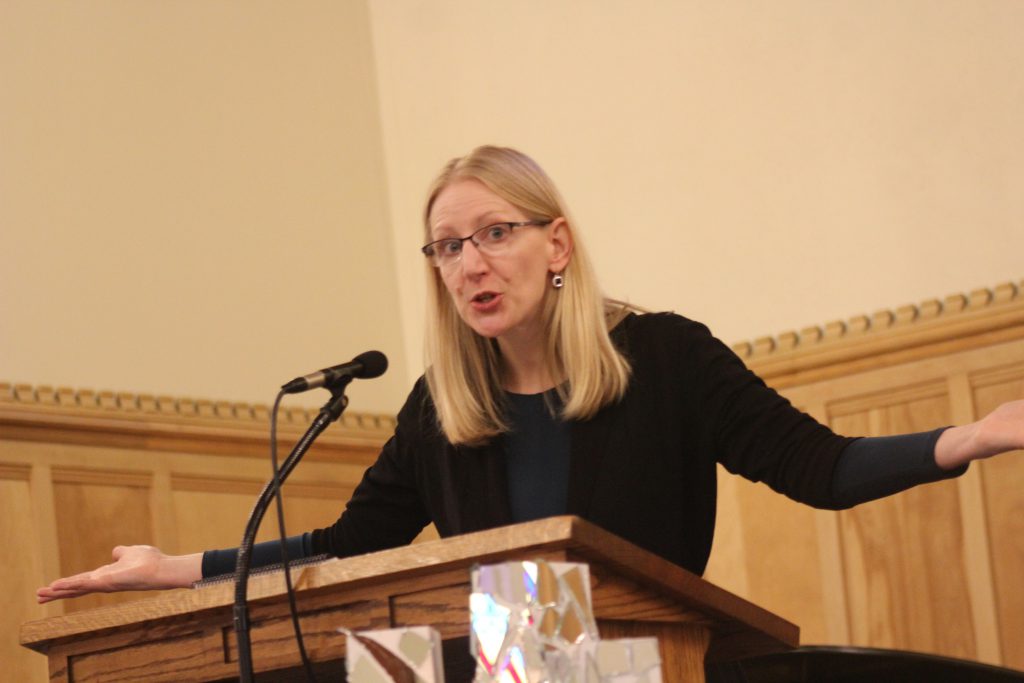 Some of you have probably heard of the book Girl, Wash Your Face by Rachel Hollis – It was #1 the New York Times bestseller list last year, and the second most popular book on Amazon.

Hollis tells about a life filled with anxiety attacks, alcohol abuse and poor choices – and her realization that she wanted to live differently.  She began seeking resources – therapy, self-help podcasts, books – that could help her make changes. She tells her readers how she identified the lies she was telling herself – lies like “I’ll start tomorrow” and “I’m not good enough” or “I’m better than you are” – and attacked each one of them head on, changing her life through hard work, tenacity, and determination. What she learned, she tells her readers, is that “You, and only you are ultimately responsible for how happy you are."

There are lots of things we have choices about in our lives, and many of the things that plague us can be addressed by looking reality full in the face and then making a decision to take some action.  And there is tremendous freedom in realizing both that we can’t control anyone else’s behavior and that we can make choices about our own.

But Hollis has been critiqued – and rightly so, I think – for ignoring the reality that are plenty of terrible things that happen in life that we can’t change through better choices, and plenty of nearly unbearable tragedies that can’t be fixed by hard work, tenacity, and determination.

For instance, it’s pretty hard to wash your face and get on with life when – like Tabitha – you’re already dead.

I’m being a little sarcastic – but those of us who have buried a child, or a parent, or a beloved spouse – we know that this promise of self-determination is a lie. The reality is that we are vulnerable embodied human beings. We are not ultimately in control of our lives. And while we often have a lot of choice about how we live in the face of that reality, pretending to have power and control where we do not is at least as destructive and dangerous as refusing to recognize and take responsibility for the power that we do have.

The story we heard this morning from Acts is about a woman who dared to face the reality of her human vulnerability. Like many of the stories of women in the Bible, we have to do some reading between the lines if we want to know much about Tabitha’s life. She’s from Joppa – that’s modern-day Tel Aviv – a seaport town 35 miles from Jerusalem, close to the border between Judea and Samaria. Joppa was a city of mixed identities, where Jews and Gentiles lived side-by-side, and people of many different ethnicities, nationalities and religions passed through or settled down to live. Like many port towns, Joppa wasn’t exactly known for its piety or propriety.

One of the few things we know directly about Tabitha is that she was that she was devoted to good works and giving to the poor. Tabitha was a prolific seamstress. In the early church, women whose husbands had died had the option of joining a community of widowed Christian women who took a vow of celibacy and shared a life of prayer and service together. It seems likely that Tabitha was a leader in a community of widows who had chosen to live a life of prayer and service, supporting themselves by working together in a sewing co-op.

The fact that no male relatives are named in the story leaves us wondering if Tabitha, too, was bereaved and economically and socially vulnerable because of the death of a husband. And we know that she must have been considered an important leader in the Christian community in Joppa because, when she dies, her fellow believers send for Peter – and she’s the only woman specifically referred to in the New Testament as a disciple.

The name “Tabitha” – or “Dorcas” in Greek – means gazelle. Gazelles are small, quick, graceful animals – kind of like little deer. The ones that live near Joppa are only about two feet high at the shoulder and can run up to 60 miles per hour. They are incredibly well adapted for life in the desert – they can go their entire life without drinking water, getting all the hydration they need from plants. Gazelles live in the in-between spaces – often just beyond the outskirts of cities and towns. They are border creatures – not fully belonging to the desert or to the settled places.

Gazelles in the Bible are symbols of beauty, life, and love. They also were a symbol in the early church of proselytes – Gentile converts who chose to commit to the Jewish community and faith, leaving their birth faith – and often their family connections – behind. Like gazelles, converts were border creatures, seeking the water of life, but never fully in the heart of the community. Some scholars think that Tabitha was given the name by her faith community because she was a convert.

I wonder what it was like for Tabitha to try to find a place of belonging as a widow in a faith community that wasn’t hers by birth. I wonder when she felt most at home and fully herself – maybe talking and laughing by candle-light over a sabbath dinner with some of the friends with whom she worked and prayed. Or maybe when she gave alms to those in need and heard, in response, their thanks to the God of Sarah, Rebecca, and Rachel.

And I wonder how often she still felt like an outsider. Those who join a community from the outside know that it often takes years – if it ever happens – to find the same ease and unquestioned sense of belonging of those born into the heart of a community. An outsider can choose a faith community, but true belonging depends on the willingness of the faith community to choose the outsider in return, and to continue to choose them – to reflect back to them their belonging, to claim them as one of their own, not just in the good times, but also when things get rough and the community begins feels stressed or threatened. And as a widow in a faith community that celebrated family life, Tabitha would be doubly an outsider, and doubly vulnerable.

But this community does own her. There’s no more vulnerable moment in human life than the moments after death. There’s absolutely nothing we can do, no matter how powerful we are in life, to guarantee that we will be treated with dignity and respect after death. We are dependent on others – on their willingness to extend the same care and respect to us as they would want for themselves and their loved ones.

Tabitha’s community gives her this care. They surround her in death as they had in life.

When a member of a Jewish community dies – and this is done today in much the same way that it was in Tabitha’s day – members of their synagogue gather – often within hours – to care for their body. The body of the person who died is washed, immersed in water for ritual cleansing – similar to a baptism –  and then dressed in a white linen shroud. From the moment of death until burial, the person who has died is attended continuously by a family member or member of their faith community.

Peter sends all the mourners out of the room and then kneels to pray like Jesus in the Garden of Gethsemane, looking death straight in the eyes. And then he calls out her name.

Tabitha hears her own name – and she does rise. She sits up, and then takes Peter’s hand and stands.

Tabitha rises, not through her own power and control, not through hard-work, tenacity and determination, but through the life-giving power of God. Tabitha is called back to life, and called to new life, by the creator and giver of life. Tabitha doesn’t earn life, or grasp it, or create it herself – she receives life as a gift from the giver of life.

Peter calls her friends back into the room and  presents the newly alive Tabitha – it’s as if he were presenting a newborn child or a newly baptized convert – Here is someone you know and love he’s saying – who, in this moment, has crossed the threshold of a new identity, a new status, a new place in you community. He’s presenting her as one who has passed through the waters of death into new life, who has been reborn.

I don’t know anyone who has been raised from the death in the way that Tabitha was. But I do know people – some of us among them – who have received the gift of life in the midst of the traumas, griefs, and losses of life. I have seen the Spirit at work, bringing new life where there was despair, anxiety, fear and hatred.

When I think about what I would say to someone facing what Tabitha faced – something other than “Girl, wash your face” –  I think of this poem called First Lesson by Philip Booth. He writes:

Lie back daughter, let your head
be tipped back in the cup of my hand.
Gently, and I will hold you. Spread
your arms wide, lie out on the stream
and look high at the gulls. A dead-
man's float is face down. You will dive
and swim soon enough where this tidewater
ebbs to the sea. Daughter, believe
me, when you tire on the long thrash
to your island, lie up, and survive.
As you float now, where I held you
and let go, remember when fear
cramps your heart what I told you:
lie gently and wide to the light-year
stars, lie back, and the sea will hold you.

No amount of determination or hard work or tenacity will allow any of us to avoid suffering and grief and – sooner or later – death. Thrashing around in the face of the things we cannot change will only wear us out and make it harder for us to know ourselves to be held.

But the promise of this story  – the promise and wonder of resurrection – is that even in suffering and grief and death, we are not alone, we are not forgotten, we are not abandoned. Jesus is there calling our name, inviting us to rise up to new life.

So don’t be afraid, my friends. Lie back, trusting that the love of God will uphold you, and that Jesus is on his way, coming to speak your name and invite you to rise into newness of life.