Despite all the models, drawings, and peeks behind the arch and the wall that used to enclose the restrooms at CMC, and that made the fellowship hall nine feet shorter than it should be, and that hid the brick wall of the 110-year-old church building, we–if we're being honest–had no idea what the room would look like when that wall came down.

This week, it did, and just in time for Easter.

There's the plain meaning of Easter egg–the things you find in the grass and that are delivered by bunnies–but there's another meaning of Easter egg, too: "an unexpected or undocumented feature in a piece of computer software or on a DVD, included as a joke or a bonus." The arch and the brick wall were definitely undocumented when this renovation started, and definitely a bonus. I'm not going to use a picture of it in this post until the very end, so if you haven't been at church yet this week* and want to be surprised, don't scroll all the way down.

To celebrate, here's what's going on:

Happy Easter, everyone. The pictures are below, and remember: if you want to be surprised on Easter morning, don't scroll much farther. 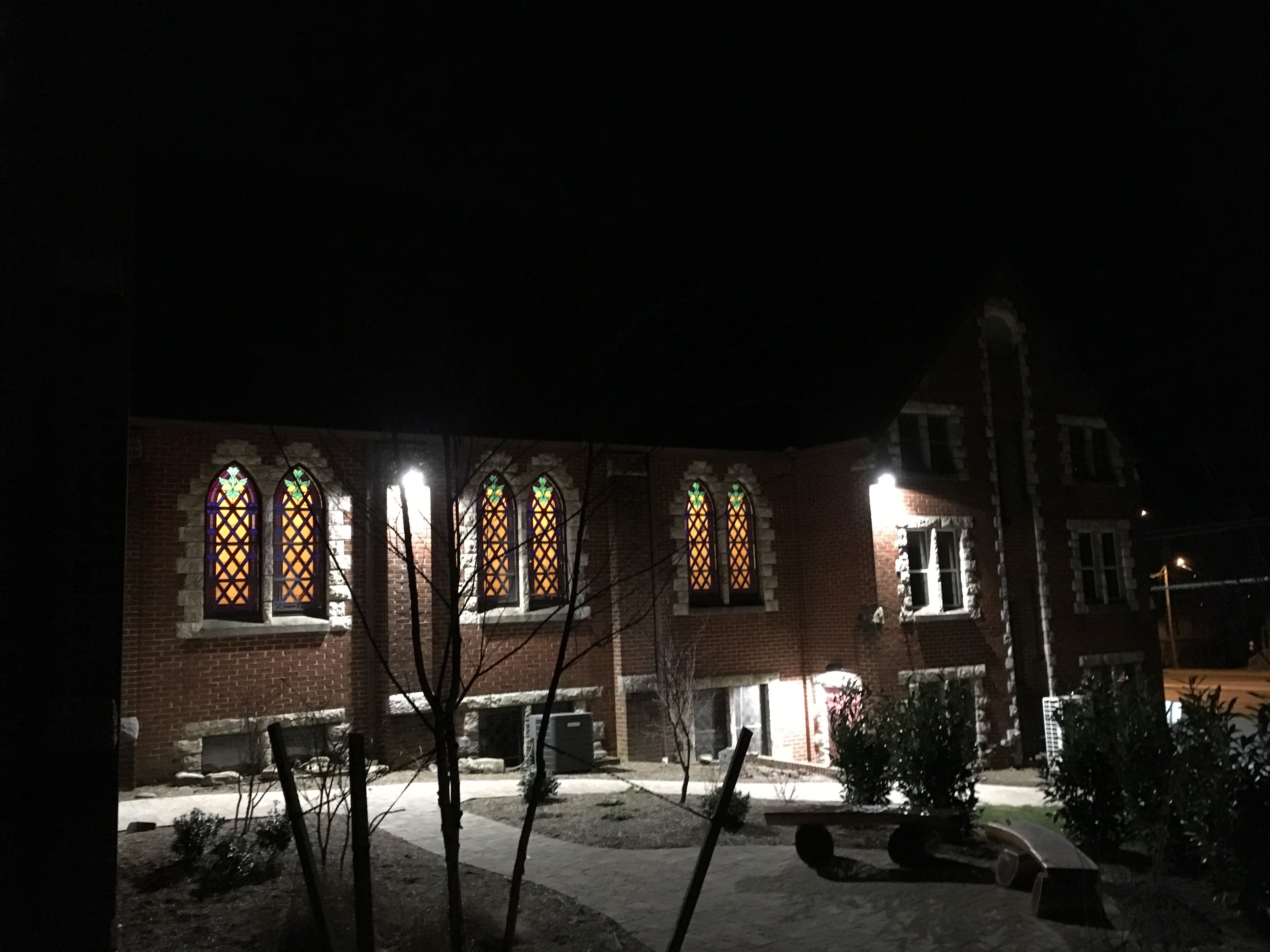 The exterior lighting all around the church is finished. On the back, the lights are motion-activated. 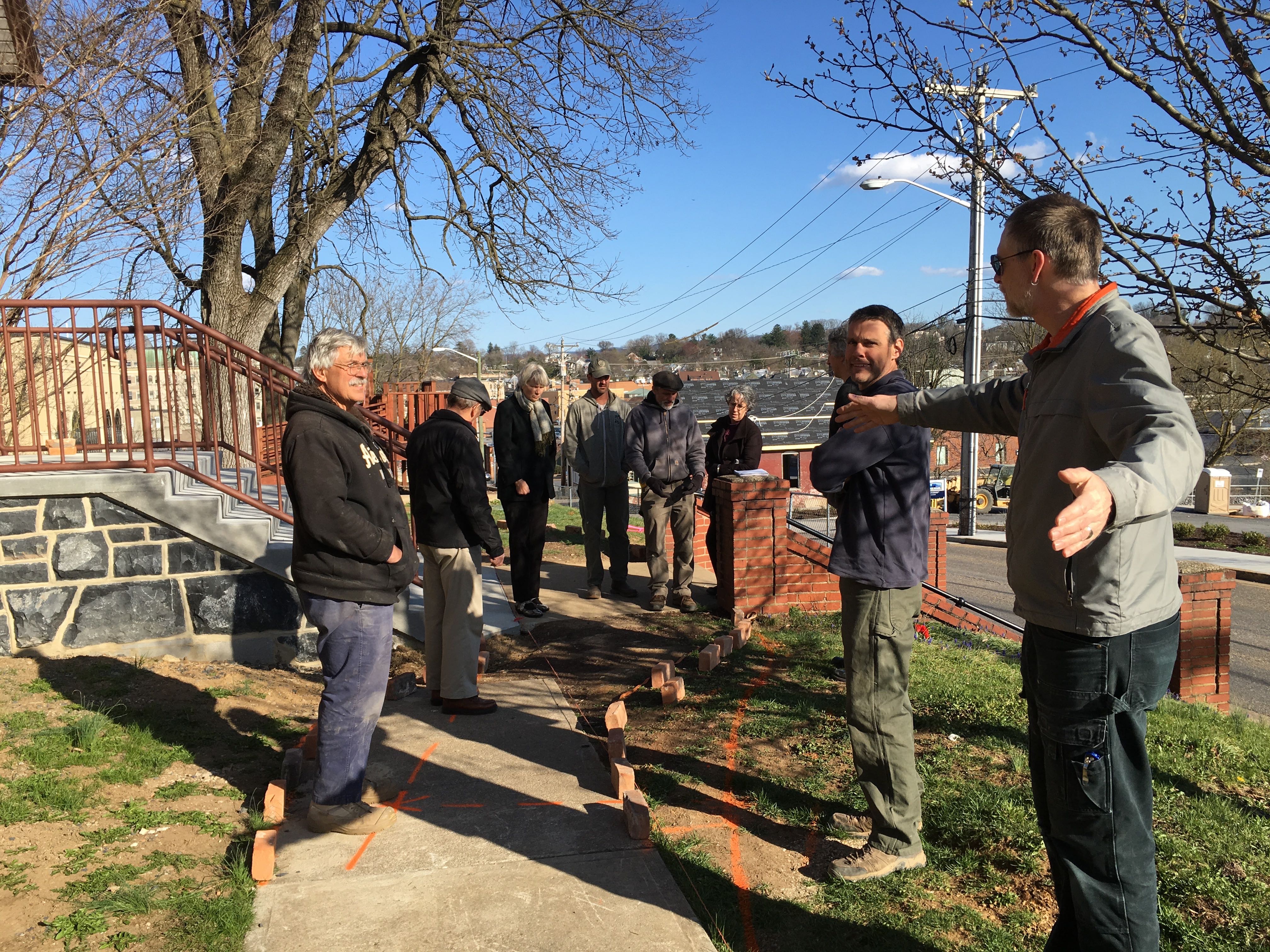 In one of the more entertaining CMC building committee meetings, we all went outside to figure out what the repaired sidewalk should look like on either side of the new north steps. For an hour. We marked are proposed designs with rope, chain, sticks, several colors of orange paint, and finally, bricks. There were a number of "how many Mennonites does it take" jokes. 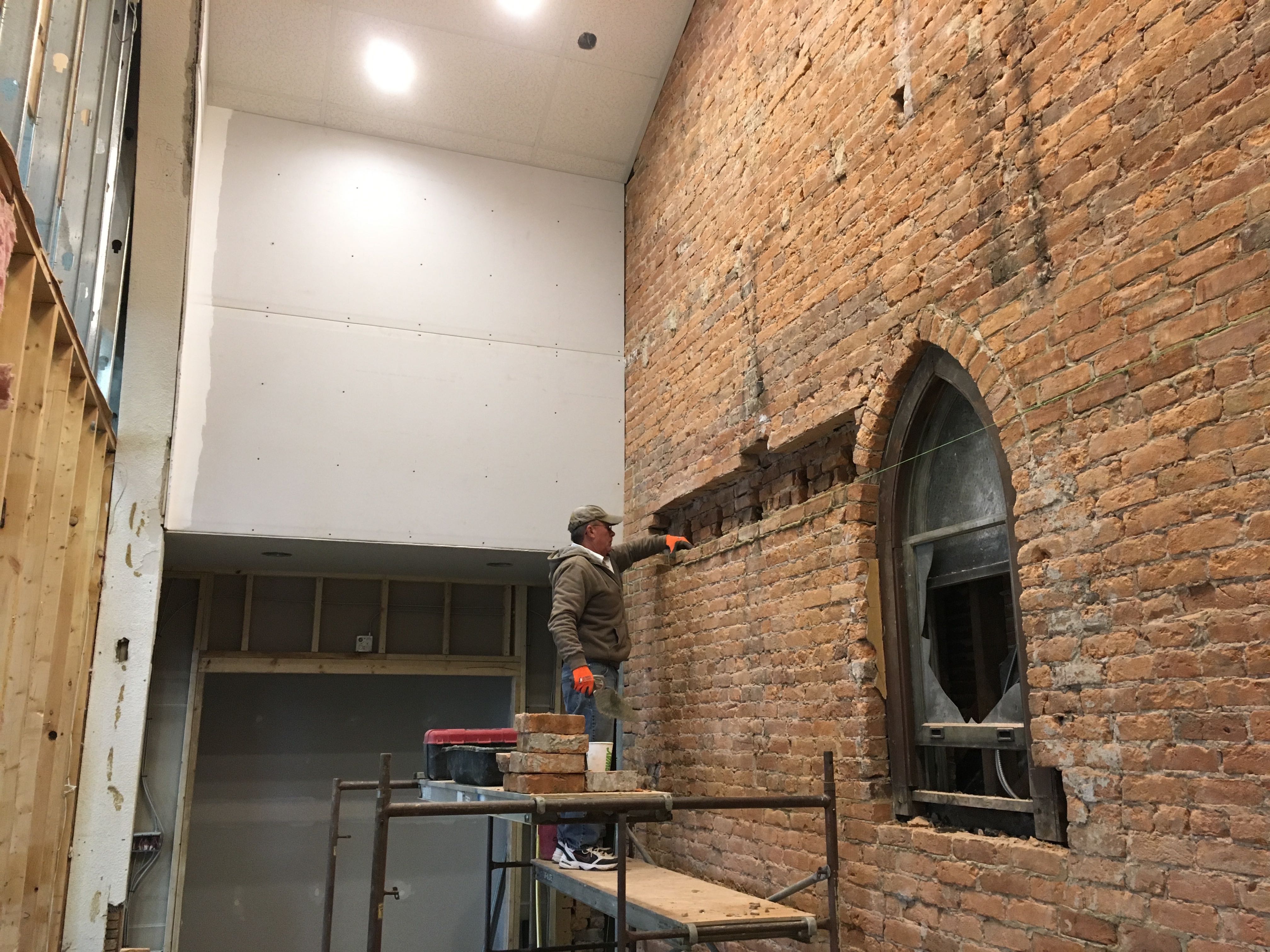 Warning: The wall pictures are starting. In this one, Freeman Troyer replaces bricks in the courses where there had been holes for some long-ago joists. The brick wall is three layers thick, by the way. 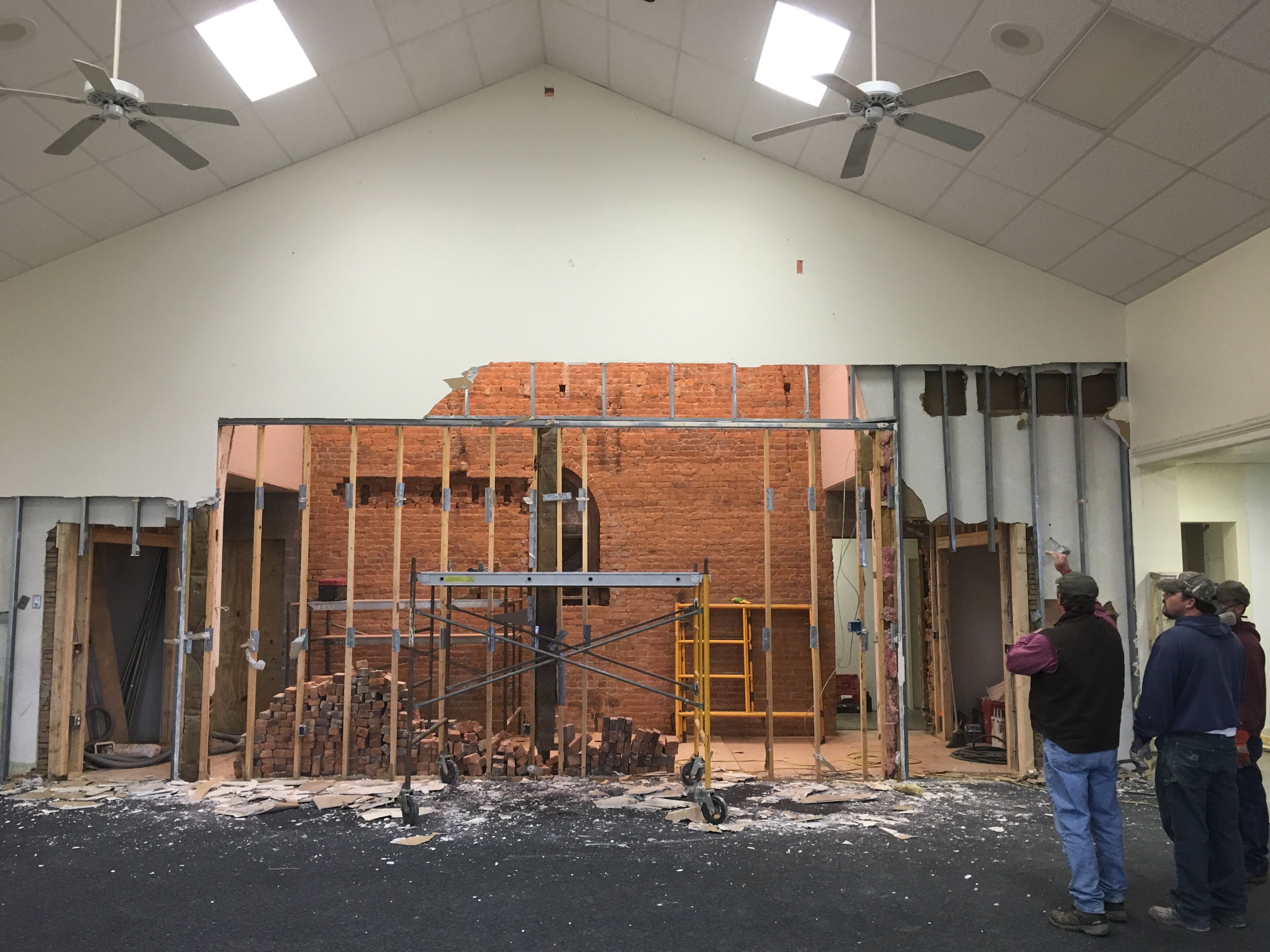 The wall starts to come down. 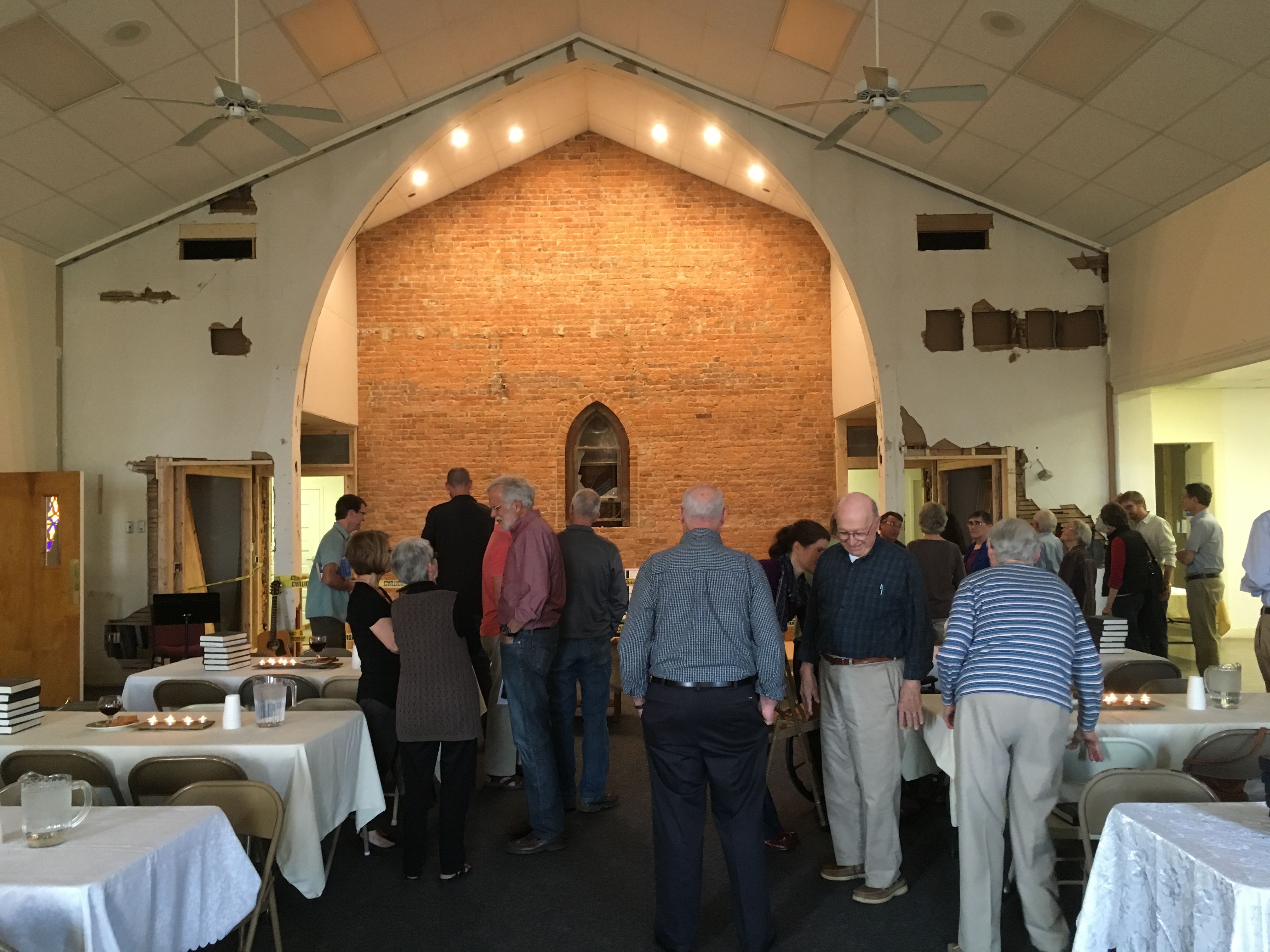 On Maundy Thursday, a service held in the fellowship hall. The arch looks even more impressive with people gathered near.