The building committee has given its final approval to proceed with the revised fellowship hall plans, which include (as described here) preserving the arch and brick wall, building storage spaces in the corners, and reconfiguring the HVAC. On the same day we took that vote (which was unanimous), Jim Herr and his crew found an additional surprise: there is a window in the brick wall, right in the middle of it. This is the kind of surprise we like, and should make that newly exposed wall even more interesting.

And in additional good news, the cost for the revised fellowship hall plan is about the same as what we had anticipated for the fellowship hall work before it was revised, and the new cost also includes an HVAC unit in the prayer alcove that we had intended to add to the total. Apparently, our contractors were running a "improve the fellowship hall design, get an extra heater for free" special. I think it was a President's Day weekend thing.

This week, we're expecting the door closer and handicap operator switch to be installed on the north entrance door; the pocket doors for room 109; and the start of brickwork restoration in the fellowship hall by Freeman Troyer. Inside the old restrooms, Herr workers will do a lot of framing for the storage spaces and mechanical rooms on the second floor, and may even cut the access doors to those mechanical rooms from the second-floor hallway.

One note on the schedule. Several CMCers have asked whether there will be a disruption to the use of the fellowship hall, and when that will be. The exact sequence of events and the extent of havoc they will wreak is not certain yet. We're doing what we can to minimize the disruption, but there will likely come a point–and by "point," we mean at least several days–when parts of the fellowship hall will become "construction areas" with appropriate barriers built to ensure safety. More details when we know them. 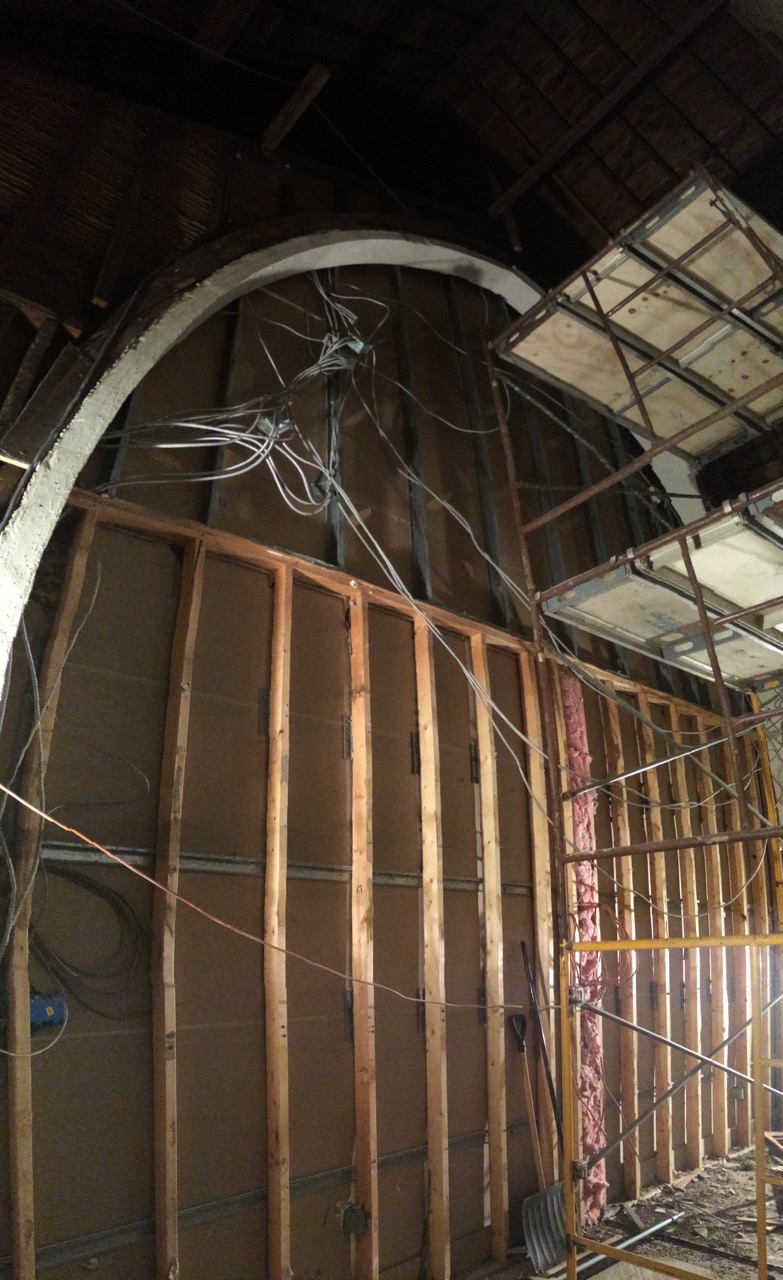 The mess around the arch has mostly been cleared away, and this is what it looks like inside the wall. The drywall and framing inside the arch will be removed to open this space. 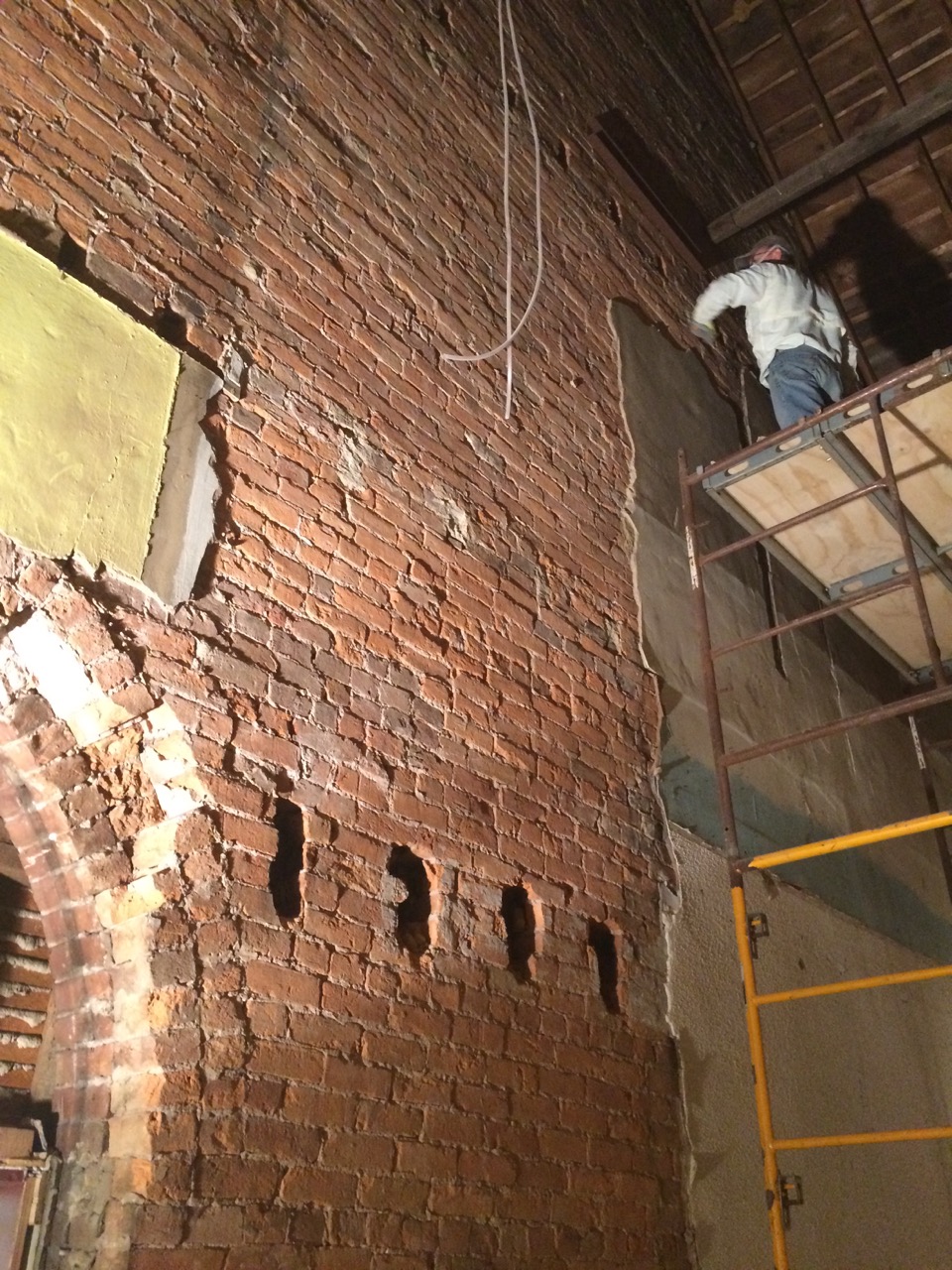 Opposite the arch, this is the brick wall that will be visible through the arch. Some plaster has to be removed; it looks like one of the plaster layers had a picture of some kind (see the blue section in the lower right), but unfortunately it was covered up by still more plaster and stuff. 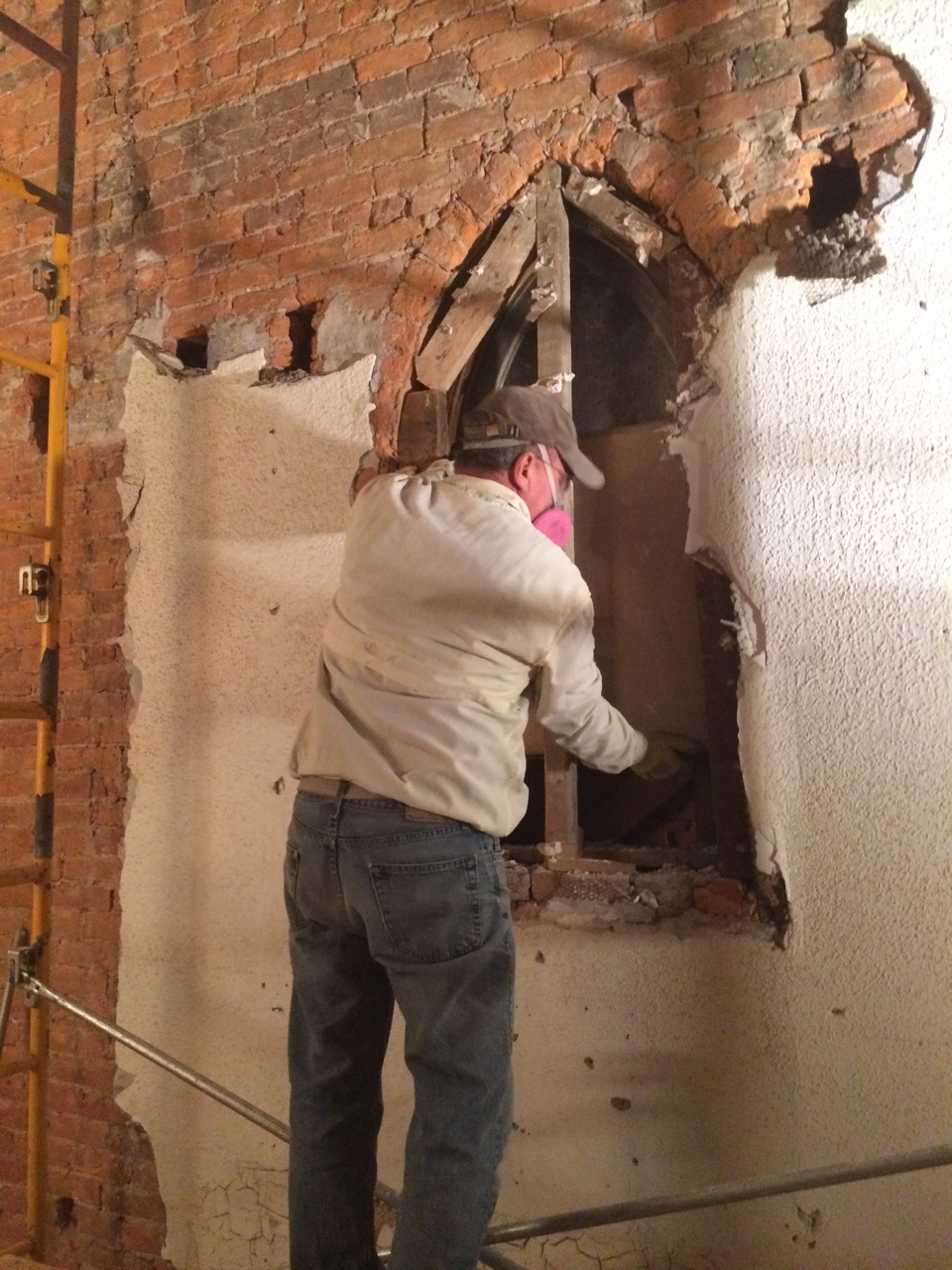 And here is this week's big surprise: a pretty neo-Gothic window right in the middle of the wall. If you looked through the window, you would see the new water fountains and north entrance door.