CMC's verse for the year comes from Jeremiah 6, and for the building project's sake it can be paraphrased as follows:

"Stand at the crossroads and look at the ancient arch. Ask where the good way is, and walk in it."

As mentioned in a few previous posts, when work began to dismantle the old restrooms in preparation for removing the north wall of the fellowship hall, we found an old arch. It was part of the front of the 1903 church around which the rest of our building is constructed. The arch is both optional and integral: optional because it really doesn't hold anything up, but integral because it is there and there's no good reason to get rid of it if we don't have to.

The last few weeks, during time the original plan intended the fellowship hall be closed and torn up, have been spent standing, sometimes literally, in the ancient arch, figuring out what to do with it, and then planning how to do that. The first idea was a vault connecting the arch to the back brick wall, keeping the large entrance planned for the middle of the wall, as shown below. 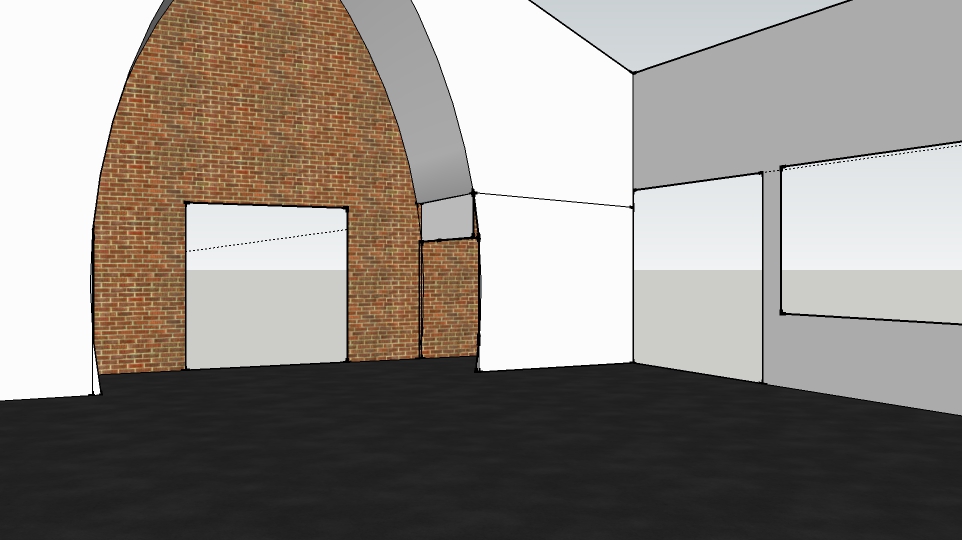 Sort of like this. You can at least see where the arch is. Jeremy drew this one after seeing the arch, getting excited enough to get a trial copy of some software and learning to use it enough to draw this one. The kitchen in this picture is to the right.

The building committee then had ideas about making a balcony within the arch, accessible from the second-floor classroom hall. Upon further consideration, that seemed impossible because work on the second floor would "un-grandfather" lots of building codes that we aren't remotely prepared to deal with. Another more useful idea involved relocating HVAC units to the two sides of the arch, on hidden platforms at about the second-floor level. This allows us to avoid lowering the ceiling by a foot for duct work and makes the HVAC installation easier, shorter, and cheaper. We also discussed using the corners of the fellowship hall, inside the arch, for chair and table storage, which while it takes away some fellowship hall space, it saves the room the chairs and tables would take up elsewhere. Finally, we talked about making two small doors in the brick wall (coincidentally, where there already were openings that had once been restroom entrances) to make the space directly under the arch more usable and less of a thoroughfare.

These concepts are brought together in this model. 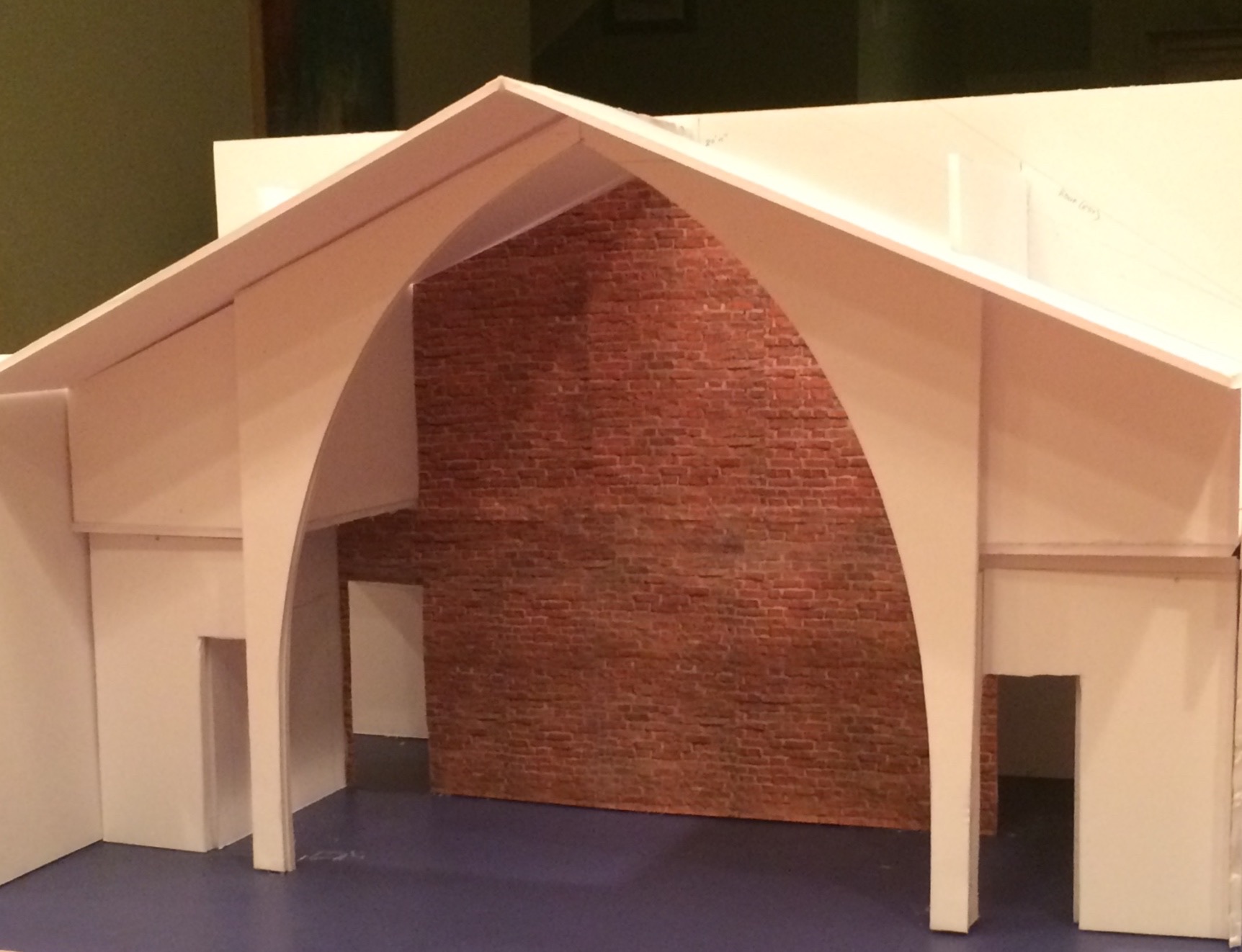 So, Jeremy's software thing was nothing. Jack got the model idea in mind and made a half-dozen versions of this with poster board, some brick pattern he found on the Internet, and considerable cleverness. One had the impression that he was hoping more ideas would arise so he could make more models. This one can be seen in the church library, and was very helpful in our discussions.

In this version, you see:

This, then, is basically our working plan, pending lots of details. We're aware that one big attraction of the renovation plan was the expanded fellowship hall; it would have grown by about 500 square feet. This plan only adds 300 square feet of floor space, but does make that space more usable (due to the change in traffic pattern) and assists with other space needs in that it provides storage in corners we might not otherwise use. Cost estimates are pending, but it's expected to be similar to the original plan due to some savings in labor (no need to lower the ceiling) and HVAC equipment.

We'll keep you posted. If things go as planned, the revised schedule will go something like this:

That's all theoretical at the moment, but it's there in case you've been wondering why the fellowship hall isn't currently in shambles. Here's one more picture from Jack's model(s) to show exactly where the arch is. 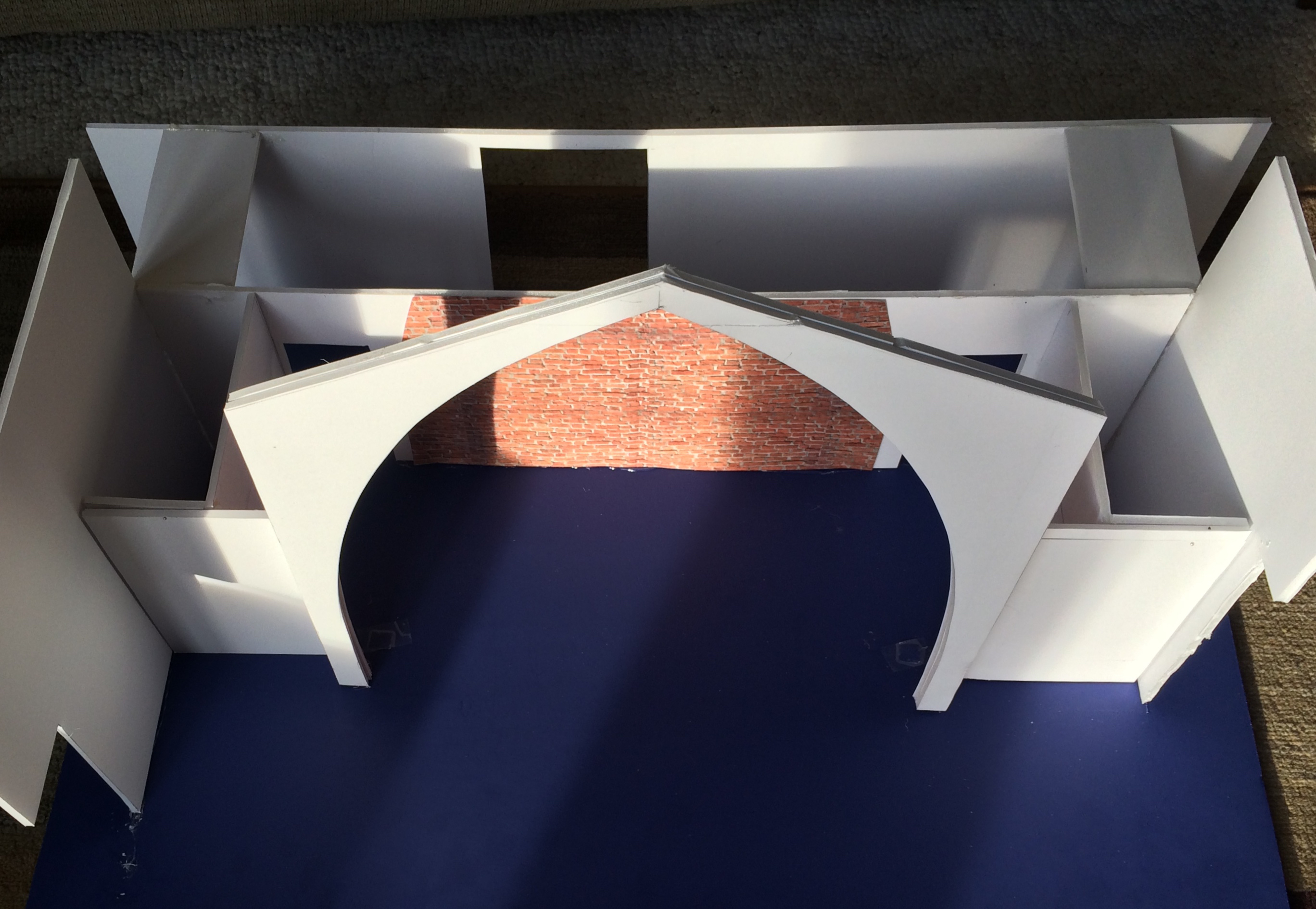 Again, the arch isn't bearing weight. It was the decorative front of the church, but also functioned to create a back-stage area or maybe to house organ pipes. In other words, there weren't always restrooms behind it.

1 thought on “Stand in the ancient arch”